From Massachusetts to Tranquility Base

July 20th marks half a century since the first time that a human stepped foot onto the moon. This week, I authored a resolution commemorating this achievement which the Senate adopted. I have included the words of the resolution for you here and I want to share with you just how pivotal Massachusetts has been at the -from the very start - in our ability to explore space.

In 1926, Robert Goddard launched the world's first liquid-fueled rocket in Auburn. The navigation system for the Apollo command was developed at MIT where astronaut Buzz Aldrin graduated from with a Doctor of Science degree in 1963,. The headsets for the astronauts were developed in Worcester and the lunar radar system was created in Burlington. The guidance computer was designed at the Draper Instrumentation Laboratory in Cambridge. Margaret Hamilton of MIT, led the team who wrote all of the navigation and guidance computer system software- she is the reason it is called software engineering. She was later awarded the Presidential Medal of Freedom. The mission's lunar module’s radar, test systems, and stabilization and control system were created in Burlington by the Radio Corporation of America’s Aerospace Communications and Control Division. There are many many more connections- first and foremost - the call to action by President John F. Kennedy.

Commemorating The Fiftieth Anniversary Of The Apollo 11 Moon Landing.

Whereas, on July 20, 1969, the Apollo 11 space program established by the National Aeronautics And Space Administration successfully landed astronauts on the moon and July 20, 2019 marks the fiftieth anniversary of this historic event; and

Whereas, the National Aeronautics And Space Administration established the Apollo space program to meet the goal declared in 1961 by President John F. Kennedy of sending astronauts to the moon and returning them safely to earth; and

Whereas, the Apollo space program built on the achievements of the prior space programs of the National Aeronautics And Space Administration, including the mercury and Gemini missions, and the successful moon landing honored the tragic sacrifice of the astronauts and crew members whose lives were lost in their service of united states spaceflight research; and

Whereas, the Apollo 11 crew launched from the National Aeronautics And Space Administration Launch Operations Center, now known as the John F. Kennedy Space Center, landed the Eagle Lunar Module on the surface of the moon 4 days later and planted the flag of the United States Of America in lunar soil, recording the achievement as the first country to land on the moon; and

Whereas, the success of the Apollo 11 moon landing was due to the skill, dedication and collective effort of tens of thousands of workers, scientists, engineers and contractors of the National Aeronautics And Space Administration and of other federal agencies; and

Resolved, that the Massachusetts Senate hereby commemorates the fiftieth anniversary of the Apollo 11 moon landing and extends its heartiest commendations to all who contributed to the success of the mission and exemplified a cooperative effort on a national scale; and be it further 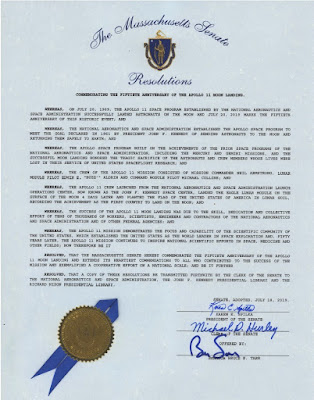