My Senate Resolution Calls for Protection of Massachusetts' Waters

Protecting Our Coastline and Communities from Offshore Drilling

LIVE: I am at the Bureau of Ocean Energy Management's public meeting to express my opposition to a federal proposal to open over 90% of the U.S. Outer Continental Shelf to new offshore drilling because of the potential risk to our coastal communities. 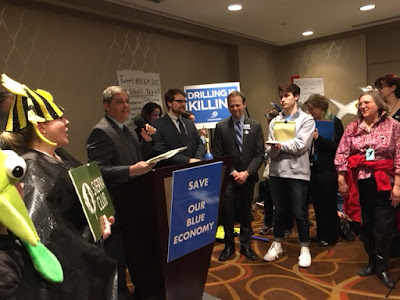 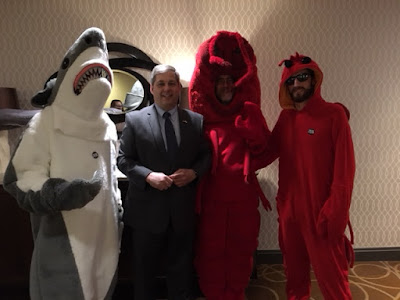 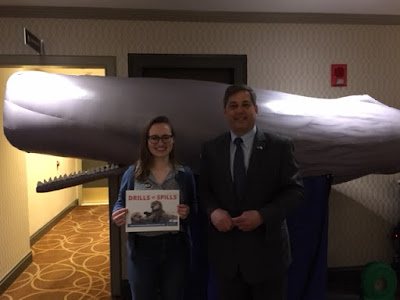 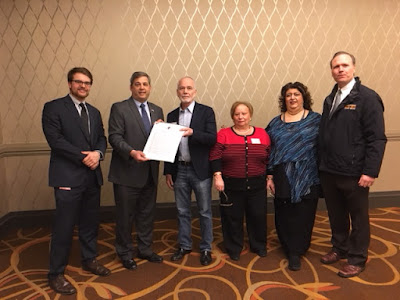 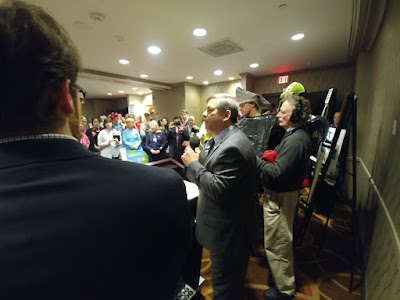 A Welcome Visit From Clifford

I had a nice visit in my office from one of the most famous dogs in the world – Clifford, the Big Red Dog. Born in 1963 from the imagination of Norman Bridwell, who lived in Massachusetts, Clifford came to the State House to help promote literacy and early education.

Featured in 80 books and a multi-year television series Clifford has helped generations of young children learn to read. 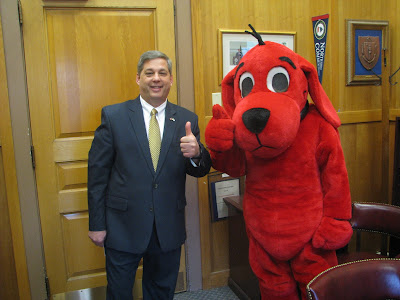 The USNSCC is a national youth leadership development organization that promotes interest in naval disciplines while instilling strong moral character and life skills. Through this organization, cadets are committed to developing abilities in seamanship and seagoing skills. The Cadet Corps instills virtues of good citizenship and strong moral principles, demonstrates the value of an alcohol, drug, and gang free lifestyle, and exposes cadets to public service and a variety of career paths. 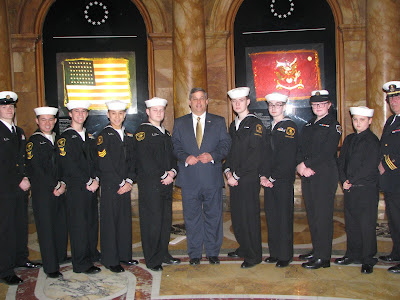 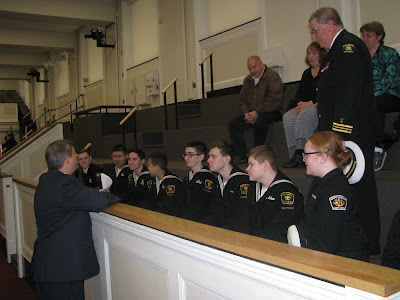 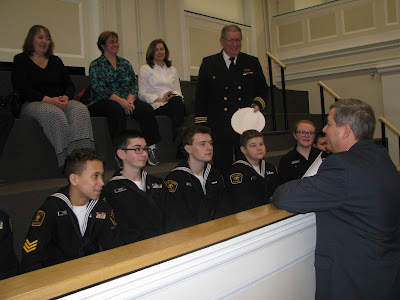 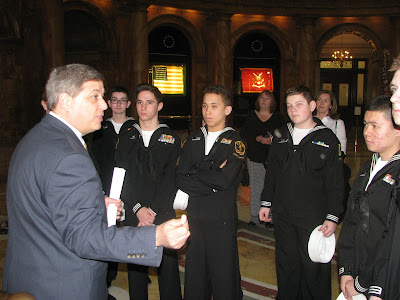 Congratulations to the Cape Ann Interfaith Commission on the celebration of their 20th Anniversary Harvest Meals Dinner. Harvest Meals is one of their major programs to serve those in need on Cape Ann and beyond.

Members of my State House staff, Peter Cusenza and Michael S. Dougherty, were on hand to share a Senate Citation that I had prepared and to help Mayor Sefatia Romeo Theken and others serve a meal of meatloaf, gravy, mashed potatoes, green beans, salad, garlic bread and dessert at St. John’s Episcopal Church. Thanks to the Mayor for the photos. 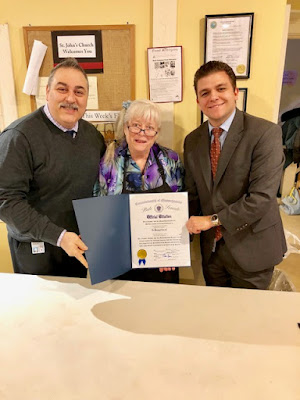 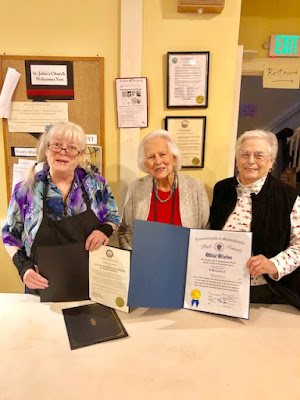 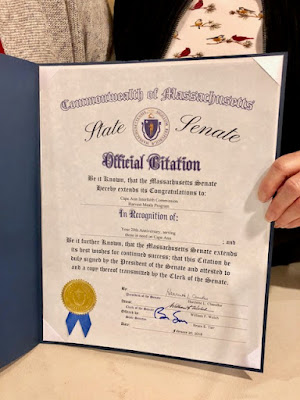 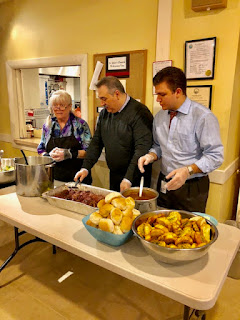 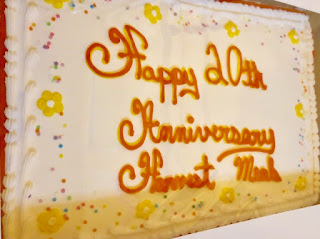 In the wake of the tragic shooting in Parkland, Florida the national debate about firearms is resuming, and it should. Violence in any form has no legitimate place in Massachusetts, or anywhere else, and that is why I’ve worked diligently, always in a bi-partisan manner, to strengthen our public safety laws, including those regulating firearms.

We should always be willing to engage one another and work to make sure that our laws are effective and keep the public safe. Such collaborative efforts have resulted in major advances in our state’s gun laws, while still respecting the second amendment:

• Following the October shootings in Las Vegas, I wrote and filed legislation to ban so-called bump stocks (of the type used in the attack) and trigger cranks. That bill, with bi-partisan support, led to legislation signed into law by Governor Baker.

• In 2014, I served as one of six members of the conference committee which ultimately produced “An Act Relative to the Reduction of Gun Violence.” Some components of this law include provisions to: give local police chiefs greater authority to petition the courts to deny applicants for shotgun and rifle permits; enhance school safety and suicide awareness programs; increase penalties for certain gun infractions; require the state’s Department of Criminal Justice Information Services to make a Web system to reform tracking the private sale of firearms; and strengthen background checks for gun sales.

Despite opposition by the National Rifle Association I supported this this bill, which also was backed by both Stop Handgun Violence, a non-profit organization committed to the prevention of gun violence, and the Gun Owners Action League.

• In the 2018 fiscal budget debate I successfully co-sponsored, with Senator Cynthia Creem, legislation requiring extensive data collection and analysis of lost and stolen guns, and firearm purchases through private and licensed sellers linked to crimes. The report, once released by the Executive Office of Public Safety, can give us valuable information about how to further address these issues.

Our nation would be far better off if Congress prioritized problem solving over inflexible partisanship, and meaningful results over rhetoric, and if organizations like the National Rifle Association would stop opposing commonsense measures.

Only through listening to, and working with, people, regardless of party affiliation or perspective, can we secure solutions to our most pressing problems. Being inclusive and collaborative works - our state has some of the strongest and most comprehensive firearms laws in the country. Now is the time for our federal government to apply our commonsense and collaborative approach to protecting people.

I have been an advocate for a program to provide one full year of tuition and fees for students enrolled in a program leading to an associate’s or bachelor’s degree at a Massachusetts public college or university. This idea is called the Finish Line Grant.

Today, the Senate adopted legislation that I authored which directs the Commissioner of Higher Education to investigate the feasibility of developing a Finish Line Scholarship Program to provide scholarships to cover the entire cost of tuition and fees for one year, other than the first, to full-time residents in need of financial assistance whose family income is less than the 125% of the median family income.

My support for a Finish Line Grant continues to grow and I am happy that there are now more than 100 lawmakers signed on as co-sponsors of legislation to make it happen. In addition, there is a strong grassroots group of students, families, faculty, business leaders, unions, and community leaders helping to advocate.

I look forward to working with them, and others, and encourage supporters to come to the State House Advocacy Day on Monday, March 5th.

The Massachusetts Department of Transportation (MassDOT) announces that pavement markings will be installed at the following locations from 10:00 AM to 4:00 PM:
• On I-95 Southbound from the Route 110 (Macy Street) Bridge to the Evans Place Bridge, and
• South of the Pine Hill Bridge to Route 113 (Storey Avenue). On I-95 Northbound from Route 113 (Storey Avenue) to the Pine Hill Bridge

MassDOT encourages drivers to avoid the area and seek alternate routes to minimize delays. Those traveling through the area should expect delays, reduce speed and use caution.

For more information, questions or concerns about the work, please contact Daniel Fielding, MassDOT Legislative Liaison, at 857-368-8959 or daniel.fielding2@state.ma.us.

On this day in 1788 - Massachusetts adopted what is now the worlds longest serving constitution “...in order to form a more perfect Union, establish Justice, insure Domestic tranquility, provide for the common defense, promote the general welfare & secure the blessings of Liberty...” With enduring thanks to John Adams, Samuel Adams, and James Bowdoin drafters of the Massachusetts Constitution of 1780.

In this mural John Adams confers with Samuel Adams and James Bowdoin at his home in Braintree, now Quincy. The Massachusetts Constitution served as the model for the constitution of the United States in 1788. This painting by Albert Herter is displayed in the State House. 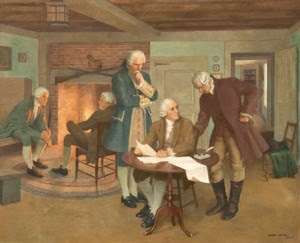 Today, many lawmakers partnered with the American Heart Association -- Massachusetts for the annual Go Red For Women Day at the State House.

We wore red to support the American Heart Association and bring attention to this issue in hopes of reducing risk of heart disease and stroke. 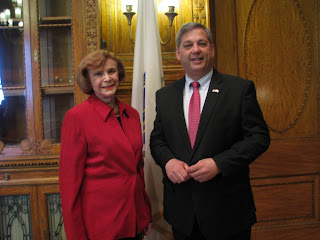 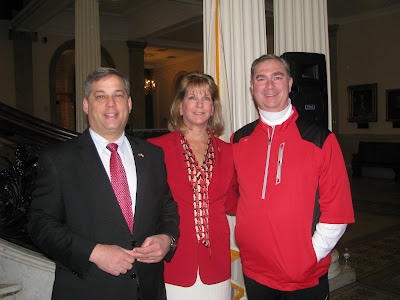 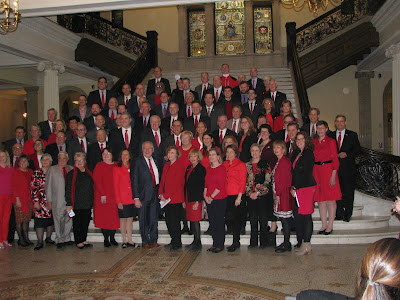 My colleagues and I serving on the Senate’s Net Neutrality Committee are listening to leading experts and government officials on impacts of Federal Communications Commission on their net neutrality actions. The committee has been formed to coordinate a policy in response to the federal government’s decision to repeal rules on net neutrality. The elimination of these regulations may put at risk important consumer protections for all internet users. This is our first hearing. You can Watch live at http://malegislature.gov 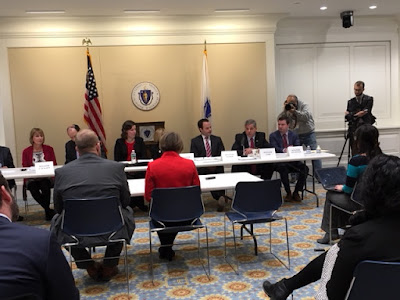 I was pleased to receive from Governor Charlie Baker a letter, which he signed, because it is a strong expression of support for our natural ocean resources. The letter stands in opposition to oil and gas developments that would exploit our waters and jeopardize fishing, tourism and recreation.

Governor Baker was joined by Governors along the Eastern Seaboard and I appreciate his response to the requests that I and some colleagues have made on this important issue. 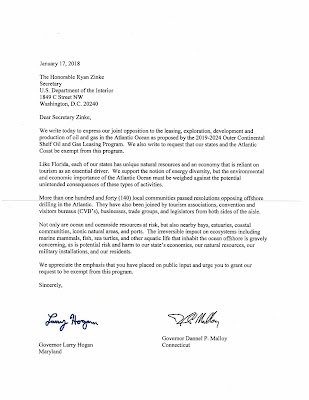 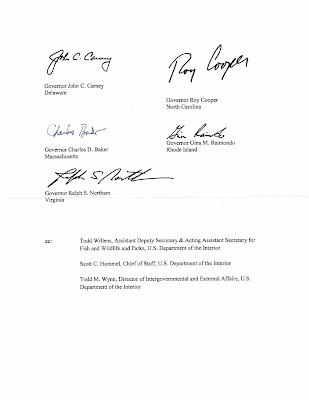 Teamwork, talent, and tireless preparation are essential in every great win. Looking forward to cheering on our team to Super Bowl victory. 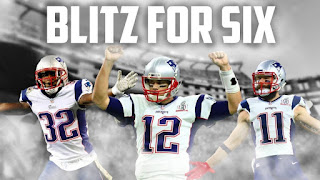 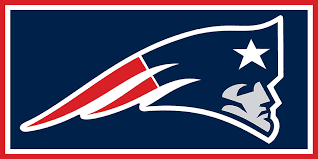 Supporting Seniors and Councils on Aging

This morning Richard Curran, my Constituent Services and Community Outreach Coordinator, attended the Merrimack Valley Councils on Aging Legislative Breakfast held at the Tewksbury Council on Aging. Discussions ranged from ways to support the growing aging population in our area and the Governor’s proposal to increase essential funding for to deliver services to seniors in our communities.

Programs which help seniors to stay active and healthy such as Meals on Wheels, transportation opportunities to reach medical appointments and grocery stores, social activities, and access to information and interaction at senior centers have proven to be effective.