The MBTA issued a license in 2014 to a wireless service company to provide commuter rail riders with better WiFi service. Today, I told the T’s Fiscal and Management Control Board about the concerns that I and others have about the impact that this project may have on the communities that the rail runs through.

The contract calls for 320 towers to be erected along the lines of some 80 cities and towns. Local officials and residents have decried the little to no communication they have had with the wireless company. I presented the chairman of the board, Joseph Aiello, with a letter that I wrote to outline concerns about the project including the potential outmoded technology, the exclusive use of T property for a lean payback to the authority, and of course the negative impacts on residents. Brad Hill and I introduced several Selectmen and town officials from communities that we serve. Here is the letter - Tarr letter to the MBTA 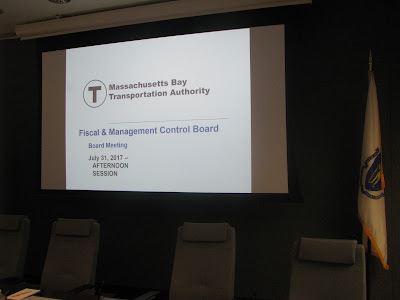 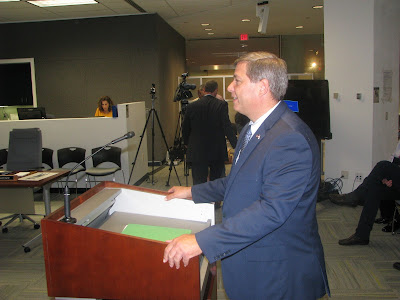 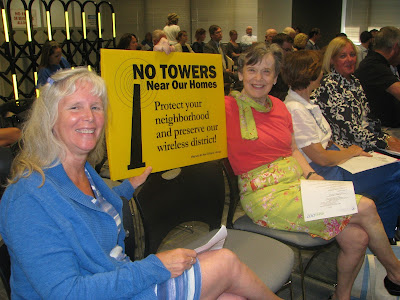 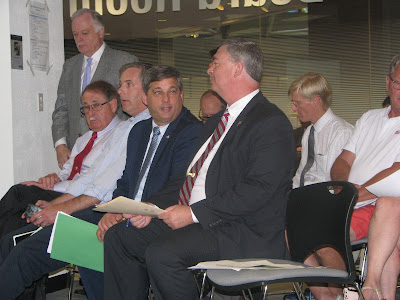 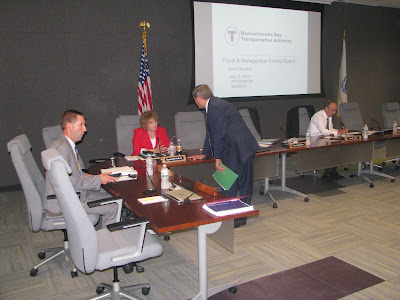 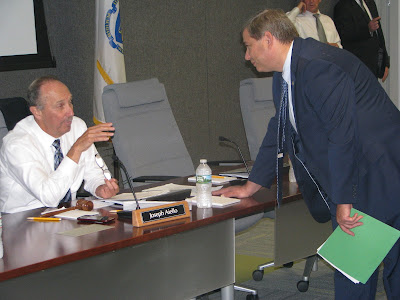 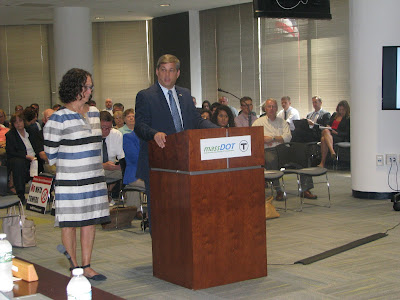 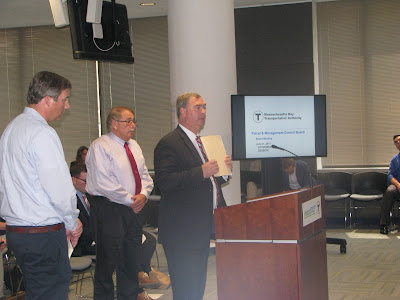 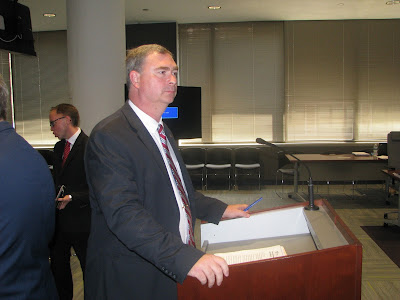 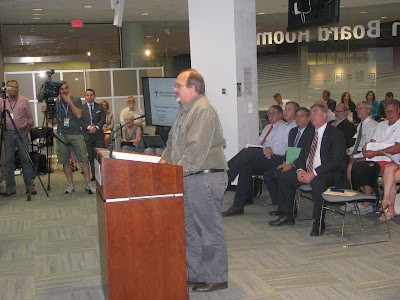 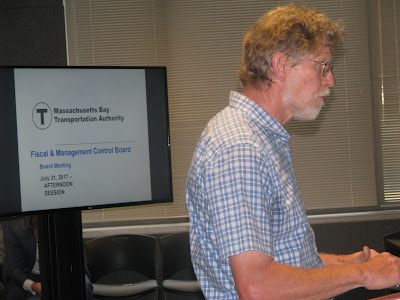 The Senate President, Stan Rosenberg, and I have initiated an effort to grow our state's retail industry. Here is more information about our plan to form a Senate Task Force on Strengthening Massachusetts Local Retail.

Retailers are an important part of our economy, and the bedrock of main streets in our communities. Yet they are facing challenges on many fronts, and we need to understand their perspective and how best to help them survive and thrive. This task force will open the door to the type of discussion we need to partner with the retail community.

I talked yesterday with the Boston Herald about the Puppy Doe case and the legislation that I filed to protect pets from abuse and harm. Abusing animals is senseless, dangerous, and a crime. Puppy Doe was whipped, stabbed, and tortured - her abuser now faces justice. Here is the item in today's paper -
Puppy Doe 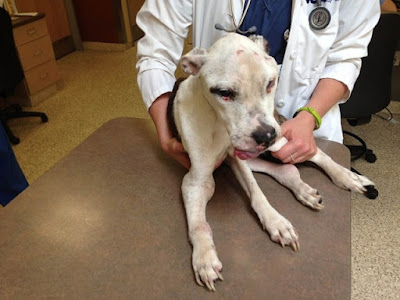 I spoke with NBC Boston reporter Karen Hensel about legislation that I filed to create a medical lifeline for those under the age of 21 who have consumed alcohol or they are with an underage drinker in a medical emergency. Seeking help fast is far more important than trying to evade potential punishment. The bill had a State House public hearing Tuesday and I look forward to an opportunity to move it to the Senate floor for action.

The bill creates a mechanism, for those acting in good faith, to be shielded from prosecution from our underage alcohol laws if they 1)contact authorities providing their full name and other relevant information at the request of law enforcement officers, 2) remain on the scene until emergency assistance arrives, and 3) cooperate with all authorities on the scene. Senate Bill 967, provide a lifeline medical amnesty for persons under age 21, you can track it's progress here- Senate Bill 967

The Commonwealth Community Compact is an initiative created by Governor Charlie Baker and Lieutenant (it was the Governor’s first executive order) to help communities pursue best practices in efficient and effective governing and reduce red tape. Yesterday, Hamilton became the 289 community to ender this voluntary program at a compact signing with Lieutenant Governor Karyn Polito.

We were joined by Representative Brad Hill, Selectman Shawn Farrell, and members of the Hamilton town staff including department directors. To learn more about the Compact program follow this link - Community Compact 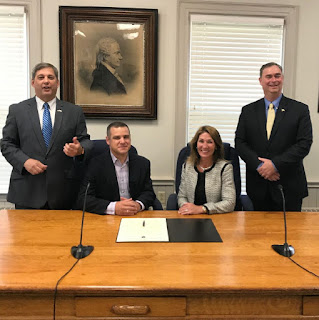 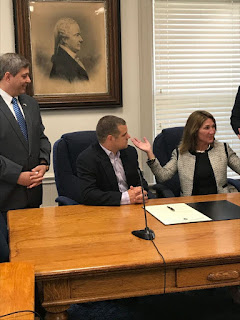 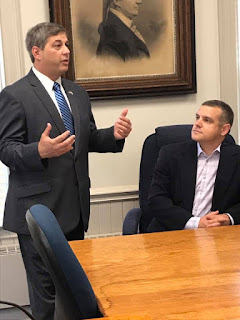 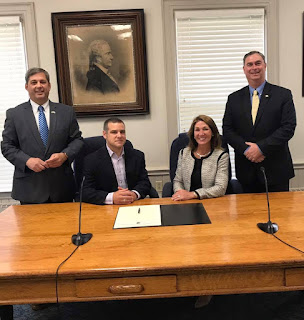 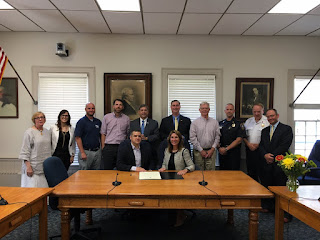 Today, the Massachusetts Department of Transportation released the Bus Shuttle Schedule for weekend and weekday service on the Newburyport/Rockport Commuter Rail Line to mitigate service disruption attributable to the installation of the federally-mandated Positive Train Control project and the replacement of the Beverly Drawbridge. These schedules are posted below: 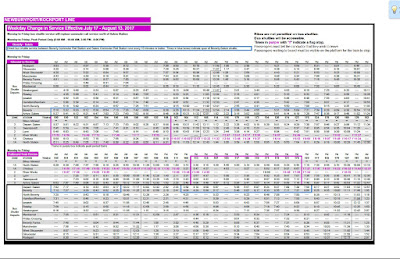 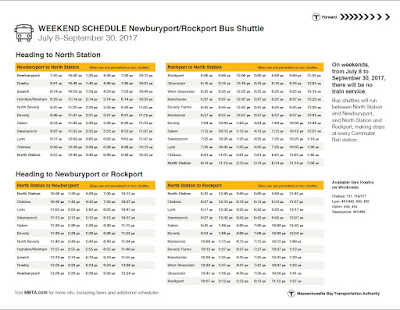 Happy Independence Day to you and to your family. Parades, feasts, and gatherings with friends are time-honored traditions since our liberty was won.

Our founding fathers welcomed celebrations to cause us all to remember the hard fought freedoms that our service men and women secured. Although I won't be able to join you at the parades this year, because I'm a bit under the weather, I'm glad that the Bruce Tarr Band is ready to kick off the Horribles Parade and play the hits we all love. Catch up with the crew in Manchester and Rockport tomorrow. 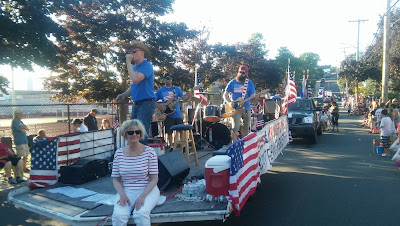 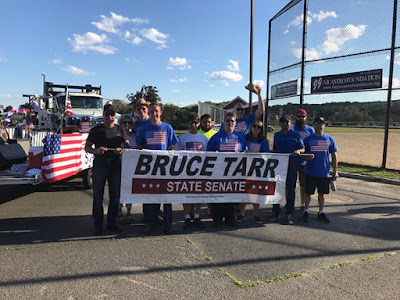