Senators voted Wednesday to adopt a budget bill which will fund shortages in major state programs and services including initiatives for substance abuse prevention and treatment and services for children and families. Lawmakers also directed $233 million into the state’s so-called Rainy Day Fund and an account.
This bill wisely closes the books on the last fiscal year by bringing resources to bear on underfunded obligations such as those in public safety and confronting opiate addiction and, most importantly it, moves us in the right direction by putting surplus funds in the rainy day fund and using them to pay down existing debt.  Governor Baker began the 2015 fiscal year with a successful effort to close a $1.8 billion funding gap, and now we are continuing to strengthen the state’s financial position with strategic investments and captured savings.t designed to pay down state debt.
The bill, initially filed by Governor Baker in July, shores up deficiencies in the 2015 fiscal year budget, and funds expanded efforts to battle the state’s ongoing opioid epidemic. Provisions of the bill include $27.8 million for substance abuse treatment and prevention programs. This legislation contains $1.2 million for a Screening, Brief Intervention, Referral and Treatment for substance abuse program in schools, and $3.8 million for substance abuse counselors.
The supplemental budget ends the fiscal year in balance and ensures a stable fiscal position for fiscal year 2016. The $120 million deposit to the state’s Stabilization Fund, or “Rainy Day Fund,” boosts the balance to approximately $1.25 billion.
In addition, the bill also:
·         Deposits $120 million into the Rainy Day Fund,
·         Provides $113.2 million to pay off state debt,
·         Provides $250,000 for a municipal police grant program to purchase body cameras,
·         Provides $2.2 million to support training and staffing needs at the Department of Children and Families,
·         Provides $1 million for training for adoptive and foster families,
·         Provides $31.5 million for snow and ice removal costs for Mass Department of Transportation,
·         Provides $21.7 million to close deficiencies in ten Sheriff Departments,
·         Sets Thursday, September 8, 2016 as the date for the state’s primary election,
·         Provides $3 million to fund Department of Children and Families training services for foster families and adoptive families and congregate care and adoption support services,
·         Provides $5.8 million to support a new program at Taunton State Hospital for civilly committed women who would otherwise receive treatment at MCI-Framingham.

The bill now goes to the Governor for his signature.

Today I had the opportunity to meet the new Portuguese Ambassador to the United States, Domingo Fezas Vital, and Portuguese Consul-General Jose Rui Velez Caraço at the State House. During a brief recess from our session debate, Senators gave the Ambassador an enthusiastic welcome following his remarks about the economic and cultural interests of our two nations. 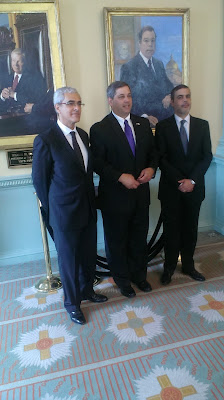 Locomotives to be Moved Away From Evans Field

Boston-  Residents and visitors to Rockport will soon have better and safer access to Evans field as a result of an agreement secured by legislators and local officials with the MBTA to relocate tracks at the town’s commuter rail station within the next several weeks, according to state Senate Minority Leader Bruce Tarr (R-Gloucester).
The MBTA has confirmed with my office that they are committed to assigning a crew to relocate the tracks at Rockport Station so that the locomotives are kept further away from Evans Field,” said Senator Tarr.  “As the terminus of the MBTA line, Rockport provides an invaluable service for public transportation and Rockport’s residents deserve to have their concerns heard and addressed.”
Tarr, who led discussions to secure the relocation with the assistance of state Representative Ann Margaret Ferrante (D-Gloucester), said that getting the tracks moved is the product of intense discussions with MBTA and town officials over the past several weeks.
“The town administrator and the selectmen made it clear that safe access to Evans Field is a major priority for the town that must be addressed, and together we have worked with the MBTA to get it done,” said Tarr.
Tarr noted that progress on the track change also resulted from collaboration on other station improvements, such as the impending upgrade of its electrical power system to minimize idling time for locomotives remaining at the station overnight. “Rockport showed good faith in granting the necessary easements for the power system upgrade, and the MBTA is responding to our concerns,” said Tarr.
As the layover facility for the MBTA commuter rail system for the North Shore branch, locomotives have regularly been left at idle overnight and at other times in an area immediately adjacent to the heavily used play field. 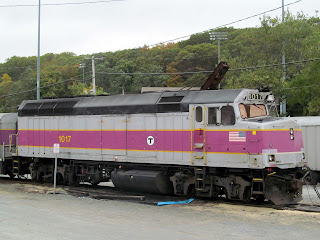 Restaurant patrons may soon be able to enjoy a greater variety of locations offering wine and malt beverages in Rockport.  Legislation that I filed, co-sponsored by Ann-Margaret Ferrante, on behalf of the town extends up to five new alcohol licenses has now been signed into law by Governor Baker.

This new law allows the Board of Selectmen to ask Rockport voters to decide on the adoption of a ballot question which, if approved at a future town election, will make three year-round licenses and up to two seasonal licenses available for clients at restaurants.

In April, citizens at Rockport's Annual Town Meeting supported an article on the warrant to request that legislation be filed at the State House.  With the bill’s adoption into law, town voters will soon have an opportunity to authorize selectman to permit alcoholic beverages to be drunk on the premises of year round and seasonal eateries.

If the ballot question is approved by voters, Selectmen can issue regulations concerning hours of service and other restrictions.

Proponents believe the new restaurant licenses would give residents and those visiting the town more dining options, promote greater consumer awareness of Rockport, and yield enhanced economic development for the town.

Voters will likely have the matter placed on the ballot for the May 3rd municipal election.

The text of the law is available at: https://malegislature.gov/Bills/189/Senate/S46


Takes Steps to Pay Off Debt Early and Add Money to the Rainy Day Fund
Boston-  The State Senate advanced a bill today to address shortfalls in a number of state agencies and direct funds to a growing number of priorities such as; protecting children, retooling criminal justice programs, and addressing several public health and public safety initiatives intended to combat the consequences of substance abuse.

The $341 million bill sends training and system upgrade funds to the Department of Children and Families, makes final payments for contractors who cleared away last winter’s snow and ice, and several other state programs including a $250,000 pilot grant to equip local police with body cameras, $5 million for homelessness prevention and a $120 million deposit into the into the state’s so-called Rainy Day Fund which currently contains $1.1 billion.

“This bill reflects a number of key priorities for the Senate and the Republican Caucus because it protects the health and well-being of children, expands substance abuse coverage, seeks to study the PARCC school assessment prior to any decisions to adopt it,  and takes responsible steps to stabilize state agencies ,” said Senate Minority Leader Bruce Tarr (R-Gloucester).  “Among the most important hallmarks of this bill are those which reflect and support fiscal discipline; a $120 million deposit into the state’s Rainy Day Fund and $100 million to pay off debt.”

Members of the Senate Republican Caucus offered several amendments to the bill, included among them; $20 million in additional Local Aid to municipalities, $10 million in heating funds for low-income families, and extended Medicare coverage for health patients.

After debate, Senators adopted a proposal offered by Tarr to require the Department of Elementary and Secondary Education to conduct a feasibility study prior to any decision of adopting the Partnership for Assessment of Readiness (PARCC) standardized test, in place of the MCAS.

“I am pleased that we were able to close out the 2015 budget while making up any remaining deficiencies,” said Senator deMacedo (R-Plymouth) the Ranking Republican on the Senate Committee on Ways and Means. “We were able to use remaining funds to address the shared priorities of the Administration and Legislature while maintaining our fiscal responsibility and prioritizing the maintenance of the Rainy Day Fund.”

The Senate gave unanimous support to two other Tarr provisions; one requires the Department of Public Health to seek federal approval to allow those who receive WIC benefits to use them on diapers for infants.  Currently, families receiving WIC are barred from doing so.

In addition, the Senate also gave unanimous approval to Tarr’s amendment which seeks to secure federal approval of a waiver to address hospital observation days of patients, control the costs of hospital stays, and reduce the burden of post-acute care in patients.

Senate Bill 2025 encompasses a number of health related areas including directing $203 million to address MassHealth shortfalls, expanding substance abuse efforts to protect school children with $1.2 million for drug screening, $3.8 million to fund substance abuse counselors in schools,  $15.2 million to open residential beds, $5.8  million for a substance use treatment program to provide detoxification and clinical services for civilly committed women with substance use disorders, and $300,000 for the Trial court to coordinate service for individuals with mental health and substance abuse needs.
In addition, other areas of the bill include:
·         $31.5 million for snow and ice removal costs for Mass Department of Transportation,
·         $21.7 million to close deficiencies in ten Sheriff Departments,
·         Setting Tuesday, Sept. 6 as the state primary date,
·         $3 million to fund Department of Children and Families training services for foster families and adoptive families and congregate care and adoption support services,
·         $5 million to support homelessness diversion, prevention and housing stabilization programs,
·         $9.5 million for National Guard student tuition and fees reimbursements,
·         Reviving a special commission charged with examining housing and shelter options for victims of domestic violence and sexual assault,
·         Setting the state budget for Fiscal Year 2015 into balance.

The House has also adopted a similar bill to close deficiencies in state departments, the bill will next move to a conference committee of House and Senate members to produce a final bill.
The text of the Senate bill can be read by clicking this link: https://malegislature.gov/Bills/189/Senate/S2025