Hamilton Goes Green and Get Green

Congratulations to the Town of Hamilton for having been awarded Green Communities funding of $250,000 from Executive Office of Energy and Environmental Affairs Secretary Matthew Beaton today.

Hamilton was one of only 47 cities and towns to successfully compete for funds for energy efficiency and renewable energy projects. As a 'Green Community' Hamilton is committed to reducing energy consumption by 20 percent over five years. This will help to save money, lower emissions, and improve public health.

This week, the Senate is expected to take action on a bill that will modernize and strengthen our state’s renewable power supply and foster our energy independence through competitive contracting, a diversified pool of generation, and greater efforts in expanding efficiency.

The Senate bill, an Act to Promote Energy Diversity, contains a robust set of renewable energy components which will require the procurement of on and off-shore wind energy, an expansion of the Renewable Energy Portfolio Standard which doubles the growth rate to meet emissions standards, and the opportunity for large-scale hydropower generation projects.

“Our region stands to lose more than 10,000 megawatts of electric generation in the next decade and beyond, and we must chart a course to replacing that power with carefully planned, cost-effective and environmentally sound sources of energy that residents and employers can depend on. The time to start that process is now,” said Senate Minority Leader Bruce Tarr.

The bill goes a long way to lowering emissions, drawing from cost-effective resources and sparking infrastructure investments and industry job growth in advanced manufacturing for energy storage systems. Members of the Senate Republican Caucus are supporting measures which will require utility companies to use transparent and cost-effective procurement through long-term contracts.

Building on the foundation of the bill, members of the Senate Republican Caucus are offering several individual amendments to boost our supply of environmentally sound energy. Among them are measures to: 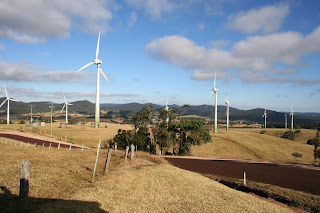 Senate Republicans Strengthen Bill to Support Veterans, Servicemembers and Their Families Veterans HOME Act Extends Commitment to Our Veterans BOSTON- Senate Republicans today unanimously supported a Senate bill, An Act Relative to Housing, Operations, Military Service, and Enrichment, known as the Massachusetts HOME Act, which expands on the commitment the Senate has made to our veterans, servicemembers and their families. The HOME Act contains several provisions to boost housing options for veterans, expand property tax exemptions, create new employment and educational opportunities, and other provisions. Massachusetts has the nation’s strongest benefits program for veterans.

“This bill earned bi-partisan support because it provides important benefits to veterans and their families in terms of employment, housing, property tax relief, education, and other services,” said Senate Minority Leader Bruce Tarr (R-Gloucester). “Massachusetts leads the nation in our assistance programs offered to veterans, and rightly so because they deserve a support system which reflects their vital service to America and sacrifices on our behalf.” Members of the Senate Republican Caucus successfully championed several amendments to the bill.

Those provisions added veteran protections and benefits to: • Establish a Veterans Relief Fund – Creates an option to allow cities and towns that choose to create a fund to assist local veterans and their spouses with their food, transportation, heat and oil expenses. Donations would go directly to support local veterans, • Provide Paid Veterans Day and Memorial Day for veterans- Requires that employees who are veterans be granted paid leave if requested, • Promote Veteran Property Tax Abatements- Creates a study on the feasibility and merits of a sliding scale property tax abatement for veterans and spouses, based upon a percentage of disability, • Expand Access to Higher Education for Veterans- Allows veterans to pay in-state college tuition rates immediately upon establishing residency in the state, • Preserve Local Oversight- Prioritizes local authority of and control over of the soldiers’ homes.

To honor the service of veterans and their families, the bill provides a property tax exemption for the surviving spouse of any soldier, sailor, and member of the National Guard or veteran who, during active duty service, suffered an injury or illness which was the proximate cause of death. The bill also gives veterans who have a 100% disability rating for service connected blindness a property tax exemption.

As adopted, the HOME Act contains several provisions to boost housing options for veterans such as extending preference in admission for scattered site housing units where no low-income family housing was developed. The bill also requires housing authorities to exclude amounts of disability compensation paid by the federal government for the purpose of computing rent of a disabled veteran. In addition, the bill gives eligible veterans a preference in housing for the elderly and person with liabilities in all communities, not only the community in which the veteran resides.

Other provisions of this Act include: • The expansion of the Public Service Scholarship to children of any military or service person missing in action and children of prisoners of war; • Allows employees of the Commonwealth who are members of the armed forces reserves and are ordered to service for more than 30 consecutive to be paid the regular base salary reduced by the amount received as base pay for military service. It also preserves the seniority or accrued leave time; • Allows cities and towns to appoint a veterans agent for 3 year terms instead of the current 1 year term; • Establishes the Office of Veterans Homes and Housing within the Department of Veterans Services to oversee the Soldiers Home in Chelsea and in Holyoke; • Creates a post-deployment commission to study ways to improve services to veterans who have been deployed overseas. • Adds veteran status as a protected class under the statute prohibiting discrimination in employment.

The bill will be signed by Governor Baker after it is reconciled with the House of Representatives.

In our ongoing efforts to streamline state government functions and reduce unnecessary spending, the Senate Republican Caucus succeeded in championing a number of amendments to the Senate’s budget bill.

One such reform would strip away the use of transponders and passes that provide free access to Massachusetts toll roads. According to a report by the state’s Inspector General, Glenn Cunha, the Mass Department of Transportation forfeited over $900,000 in toll revenue between November 2009 and August 2015 by allowing holders to use non-revenue transponders. Hundreds of these devices have been given to people who do not have a legitimate public purpose for their use.

That’s just wrong; they have a cost and a burden that is unjustifiable. To illustrate the financial impact, the report found that contractors, vendors, retired state workers, active state workers in non-transportation related departments through the previous administration received nearly $1 million in free service.

These non-revenue generating transponders are activated yet they are not linked to an financial account which means the user of the transponder is not charged for their use of the roads, bridges and tunnels that all other drivers must pay to use.

While we agree that MassDot and MTA workers should have transponders available on their work vehicles or for personal vehicles used to carry out work, we feel strongly that absent a legitimate purpose no one should be given a free ride.

In the past, solutions were necessary when transponders failed to provide proper discounts for motorists when they were supposed to, and again when transponders failed to properly record the correct tolls by overcharging motorists. Now, we are working to require legitimate and specific public purposes for these types of devices. It’s time to bring this kind of waste to the end of the road.

Gold On the Dome and Girl Scout Gold Under It

The Girl Scouts of Eastern Massachusetts and the Girl Scouts of Western Massachusetts came to the State House today to hold their annual Gold Award Celebration. I was particularly pleased to be able to present an official Senate Citation to four Gold Award recipients; Samantha Newbury, Caitlin Nearing, and twin sisters Sarah and Emily Gebow. These amazing young women exhibited images, graphs, photos and text to illustrate their particular initiative. The Great Hall was brimming with talented and thoughtful people including the Scouts, parents and adult leaders. Congratulations to all. 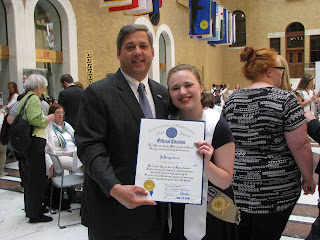 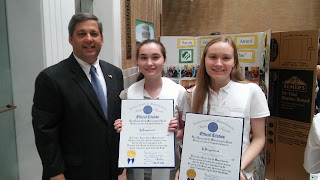 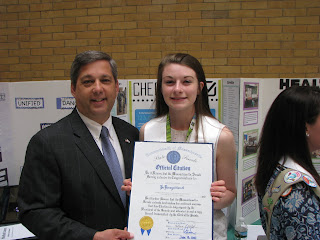 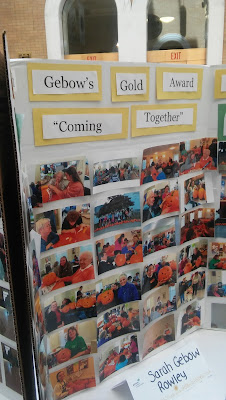 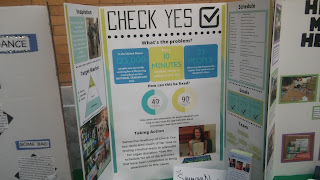 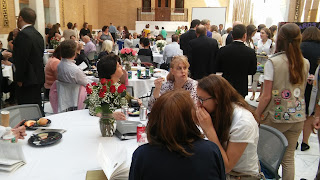 Today, I issued the following statement regarding the new Public Records law and my legislative proposal which requires the disclosure of MBTA Pension Fund documents. That proposal was adopted by the Senate in its version of the Public Records bill and included in the final version of the bill that the Governor signed into law on Friday:

“The mortar in the once seemingly impenetrable walls of secrecy shrouding the $1.6 billion MBTA pension fund has begun to crack and daylight is seeping through. For decades, T pension managers have declared that they do not have to comply with the state’s public disclosure laws, all new fund directors should take special note of the transparency requirements of the new public records law.

Governor Baker’s signature on the new Public Records law, included a provision sponsored and advanced by the Senate Republican Caucus, which compels existing and future MBTA fund managers to comply fully with the new records law.

Now, once and for all, the efforts of many who have sought the disclosure of relevant document including; the media, fiscal accountability organizations, and members of the Legislature have, with the Governor’s support, have built a new era of transparency for the T pension system and replaced walls with windows.” 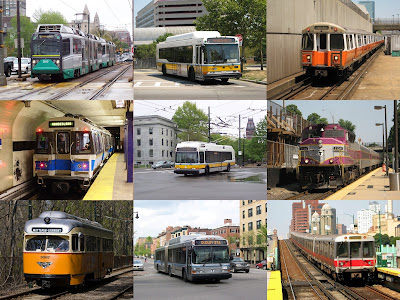 Scouting in the Commonwealth Adds Up

Today, Boy Scouts and adult leaders of seven Councils serving Massachusetts came to the Senate Chamber to make their annual report to the Commonwealth. I was happy to host this event at the State House and have Lieutenant Governor Karyn Polito join me at the rostrum to welcome the Scouts and receive their report.

Unequivocally, it is clear that Scouting is strong in Massachusetts with more than 14,800 Boy Scouts and more than a thousand Cub Scout Packs and Boy Scout Troops. Collectively those affiliated with scouting, including more than 15,000 volunteers, have given more than 200,000 hours in community service. I sincerely hope that some of today’s visitors earned a Citizenship Badge because they certainly deserve one. 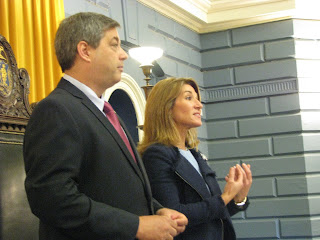 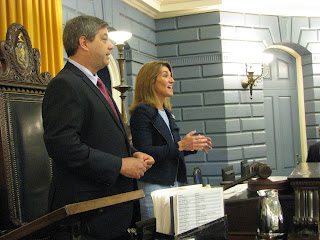 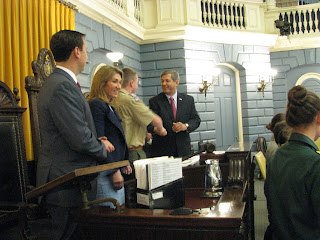 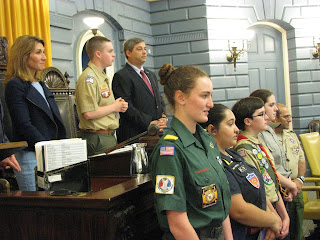 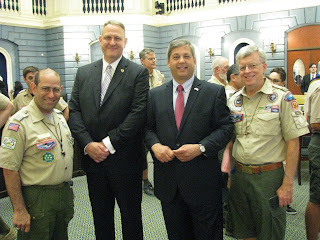 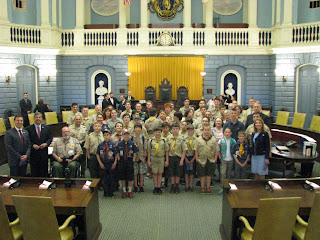 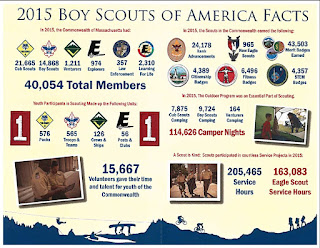 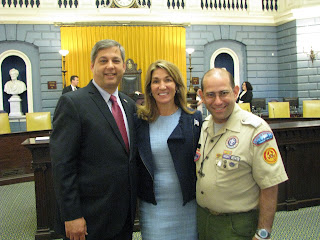