Today, I met with Governor Baker, Lieutenant Governor Polito and legislative leaders for several hours with Steve Pagliuca, Chairman of Boston 2024, to discuss the organization’s newest plans to secure the 2024 Summer Olympic Games.

In order to secure Boston as the central host, Boston 2024 must first provide specific and detailed information to the public and elected officials about how they will finance and operate the games.  Identifying financial sources for the Olympics has been a great concern since efforts to secure the games were first contemplated two years ago.

The state government shouldn’t be committed to financially supporting the Olympics by deficiency, accident, omission or inaction.  In May, as part of the Senate debate on the state budget, the Senate adopted a proposal which I initiated with our Republican Caucus.  Our amendment, co-sponsored by numerous members of the majority party, blocks all state agencies and departments from spending any public money related to hosting the 2024 Games unless a special act is passed by the Legislature and is signed by Governor Baker.  Our amendment ensures that the Legislature and Governor, as responsible stewards of your resources, are not excluded from the process.

The budget proposal received bi-partisan support and was adopted unanimously by the Senate. Under our plan, state money can only be spent for consulting, analysis and other forms of due diligence that Governor Baker and the Legislature may need. Hopefully, the House and Senate conference committee, still negotiating the budget, can include the language in the final version.  In addition, I have also filled a separate piece of stand-alone legislation which is moving through the committee process.

At today’s meeting, Chairman Pagliuca presented Boston 2024’s reconfigured proposal known as Bid 2.0.  The effort is intended as an important transition towards gaining approval from the United States Olympic Committee, I am including links to it so that you have full access.

The Bid 2.0 plan presented today by Boston 2024 claims the Boston Olympics will generate billions of dollars in spending, create tens of thousands of jobs and thousands of new housing units.  The organization estimates the games will generate nearly $5 billion and will be paid for with private money.  Recent news accounts say that Boston 2024 will secure a $128 million insurance policy to "cover against reduced revenues, general liability, non-payment by sponsors, cancellation, and other issues."

Here is a link to the Boston 2024 site which will allow you to view the information presented today: https://www.2024boston.org/docs
And, the budget amendment now pending before the conference committee can be read by clicking the link: Senator-Tarr-Spending-Freeze-Hosting-Olympic-Games

The Supreme Court of the United Sates ruled today on federal tax credits and the use of state health insurance exchanges under the Affordable Care Act. I talked with New England Cable News reporter Alysha Palumbo about the decision and the Massachusetts system. 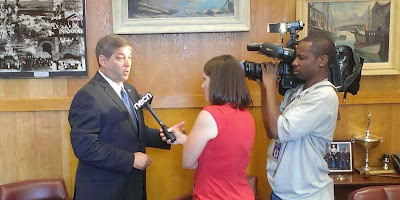 Friends, Food and Fun in Boxford

Yesterday, I had the pleasure of joining with members and guests of the Boxford Council on Aging for their first summer cookout.  We had hundreds of people join us for a beautiful day with wonderful food.

The Friends of the Council on Aging sponsored the event which brings local officials, volunteers, families and seniors together each year to enjoy one another’s company and listen to music and delight in the best traditional cookout fare.  I look forward to this event each year. 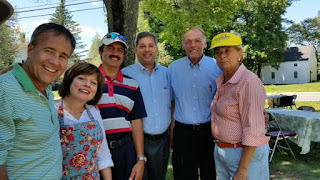 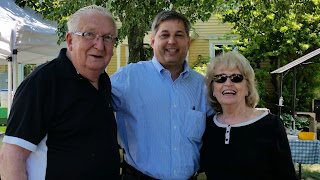 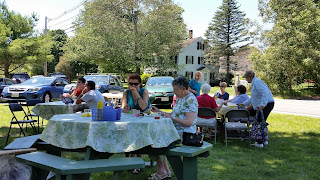 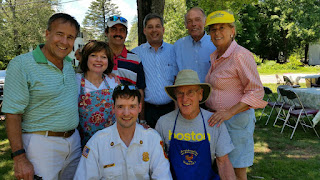 My State House office sent out the following press release regarding a budget bill that will be used implemented should the annual state budget be delayed:

Boston- With the beginning of the state’s fiscal year on July 1 fast approaching, the House and Senate have approved, and sent to Governor Baker’s desk, an interim budget that will keep state government running if a Fiscal Year 2016 state budget isn’t in place by that date.

The $5.4 billion spending plan now before the Governor would only become operative if no annual budget is made law by July 1st, and would only spend at the same rate as the current Fiscal Year 2015 state budget, or General Appropriations Act, is in place.

“House and Senate budget negotiators should be able to resolve the different versions of the FY 2016 budget in time for the new fiscal year, but if they don’t, the safeguard just passed will ensure the continuity and stability of state government that our Commonwealth deserves,” said Senate Minority Leader Bruce Tarr (R-Gloucester).


The House passed the $38.1 billion budget in April and the Senate followed suit in May with the adoption if its own budget.  A conference committee consisting of three members from the House; Representative Brian Dempsey, Representative Stephen Kulik and Representative Todd Smola, and three from the Senate; Senator Karen Spilka, Senator Sal DiDomenico and Senator Vinny deMacedo were appointed to reconcile the two versions at the end of May.

Your Money, Your Transportation System & Your Chance to Provide Input

Tonight, the Massachusetts Department of Transportation (DOT) is coming to Gloucester City Hall, 9 Dale Avenue, to provide an opportunity for the public to speak to the proposed $3 billion Capital Improvement Plan, which directs spending on infrastructure projects for the Fiscal Year 2016. Examples of these types of projects include: rail, state highway, airport, municipal road construction, bridge repair, and improvements to the MBTA transit system.

State officials will be in the Gloucester Council Chamber tonight from 6 to 8 PM, you can read the plan at http://www.massdot.state.ma.us/ and share your input.

Ally Donnelly reports that more than $1 million has gone uncollected from convicted sex offenders who fail to or refuse to pay their required registration fees. The Republican Caucus has offered language to give the Sex Offender Registry Board more tools to recover the fees that help fund the agency and protect the public.

Media Alert: On the Air With NECN

Tonight, on New England Cable News, a review of the Sex Offender Registry Board and the failure of thousands of sex offenders to properly register and pay required fees. 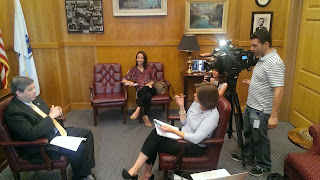 In the last 30 months, the Sex Offender Registry Board has not collected $1.2 million, the equivalent of one third of the organization’s annual operating budget. The Republican Caucus has sponsored legislation to engage the Department of Revenue, the Department of Transitional Assistance and the Registry of Motor Vehicles to help ensure that the offenders pay their required fees.  Please tune it to tonight's NECN news broadcast, beginning at 9 PM.

Last night, on Broadside, New England Cable News' show on political issues, I talked about the top tier candidates for president in the 2016 race for the White House with Jesse Mermell, former Deval Patrick communications director, and host Steve Aveson. You can watch the segment here -

My State House office released the following statement today regarding the opinion of the Justices of the Supreme Judicial Court regarding the House of Representatives’ request for an opinion, on May 22, on whether the Senate improperly originated a money bill when it voted to approve two tax related matters in its annual appropriations bill:

“Today’s decision by the Supreme Judicial Court is timely, and will be of great assistance in the negotiations between the House and Senate regarding the Fiscal Year 2016 state budget. The opinion confirms what Senate Republicans have argued consistently in 2012, 2013, 2015 – that provisions postponing the FAS 109 tax deduction are effectively a tax increase in a given fiscal year, thus making the budget a money bill.

Unfortunately, the court has provided valuable guidance for the current budget while missing a prime opportunity to render a clear framework for the consideration of future budgets by the legislature. Left unanswered are the other issues before the court that were presented in ours and other briefs.

These issues are whether or not Article 63 of the Constitution governs the annual state budget uniquely and without regard to the Origination Clause, and whether provisions reducing taxes trigger the Origination Clause. While in the opinion touches on Article 63 in footnote 26, it does not fully explore this important issue. In the absence of the court’s guidance on these issues, they are likely to be problematic for the foreseeable future.”

Give Your Input on the State's Transportation Capital Improvement Plan

The Massachusetts Department of Transportation (MassDOT) is offering a prime opportunity for people to comment on how state funds should be spent on transportation at 10 hearings being held across the Commonwealth in the month of June.

The hearings focus on the Capital Improvement Plan, which directs spending on infrastructure projects for the Fiscal year 2016, that will begin on June 15. Examples of these types of projects include: road reconstruction, bridge repair and reconstruction, and improvements to the MBTA transit system. The announcement of the hearings from MassDOT is posted below.

Please don’t hesitate to contact my office with any questions about them or transportation issues in general.

Boston- Senate Minority Leader Bruce Tarr (R-Gloucester) and members of the Senate Republican Caucus have called on the state’s Inspector General to initiate a comprehensive investigation into the diversion of trust funds from state authorities to a travel account controlled by the Patrick Administration during his tenure as governor.

“The Senate Republican Caucus believes that an investigation should begin immediately to ascertain whether the transfer and use of these funds was as a result of improper actions or if any fraud, waste, or abuse has occurred,” said Tarr.  “It appears that these transfers were made in such a manner as to elude disclosure and circumvent accountability.”

In a letter to Inspector General Glenn Cunha, the Senate Republican Caucus called recent news reports of travel junkets paid for with trust fund monies from agencies “startling and deeply concerning.”  The senators wrote, “These expenditures, and the transfers to the trusts that made them possible, seem to have circumvented the statutory and regulatory processes in place that would otherwise have made them subject to transparency, accountability, and examination by the legislature and other state agencies.”

“It is my hope that we can have an independent agency look at these expenditures to make sure that the public is fully aware of every tax dollar that is being expended, and the exact purpose of each expenditure. I am confident the Inspector General will do a fair and thorough investigation,” said Senator Vinny deMacedo (R-Plymouth) ranking Republican member of the Senate Ways and Means Committee. “I hope to be able to assure my constituents that as we face tough budget deficits, all their tax dollars have been used prudently and legally without the circumventing the legislature.”