Media Alert: “The Minority Report” with Tom and Todd

Please tune in tomorrow morning at approximately 7:30am as I join WRKO’s Tom Finneran and Todd Feinberg of the "Tom and Todd Show". We will be discussing a habitual offender bill as it makes its way through the legislative process and the upcoming state budget.

Building a Future for Pentucket

Joining me at the school for a meeting and tour of the building were Superintendent Paul Livingston, Principal Jonathan Seymour, Facilities Manager Gregg Haden, and School Committee Chairwoman Chris Reading. Senator Baddour also participated in the meeting by phone.

This visit provided me with tremendous insight into the many problems with the current school building that the district is working to address. In turn, I am committed to working with my legislative colleagues and Treasurer Grossman to maximize the state resources available to provide current and future Pentucket students with the best possible learning environment.

Recently, the New England Association of Chiefs of Police (NEACOP) has unanimously endorsed the EZ-ID bill that I filed and that is co-sponsored by Senator John F. Keenan and Representative Anne M. Gobi, joining a growing list of public safety organizations calling for the bill’s passage.

Robert D. Campbell, President of the NEACOP, recently wrote a letter on behalf of the organization’s Board of Directors labeling the EZ-ID proposal, which was crafted by Danvers resident Gary P. Richard, “truly a worthwhile project that deserves the support of Law Enforcement.”

Senate Bill 1798, also known as Molly’s Bill, would direct the Registry of Motor Vehicles to issue license plates that combine the traditional letters and numbers already used with universal, easily distinguishable symbols, such as triangles, squares and other geometric shapes. The bill is named after Molly Bish, a teenager who was abducted while working as a lifeguard in Warren in June of 2000. Molly’s remains were found three years later, but her killer has never been identified.

Molly’s Bill would require license plates to pair up to four alpha-numeric characters with one easily recognized symbol. The new format would assist law enforcement officials by making it easier for witnesses to read, identify and remember the license plate of a motor vehicle used in the commission of a crime.

In many cases, witnesses are able to recall only a partial license plate, forcing police to run a check on thousands of vehicles to narrow the list of suspects, but symbols are more easily identified. With a standard six-character plate, the number of possible matches can be narrowed to about 1 in 4,300 vehicles, but a plate issued under the EZ-ID bill would narrow the possible combinations to only 1 in 123, making it easier to identify and track down the vehicle.

Senate Bill 1798 was the subject of a public hearing before the Joint Committee on Transportation on October 19, 2011. The bill is currently under review by the committee.

Implementing the provisions of Molly’s Bill will not only help put criminals behind bars, but also will help to save lives. The new system established by this bill will significantly strengthen the effectiveness of license plates for their main purpose – identifying cars, trucks and other vehicles. I welcome the endorsement of the New England Association of Chiefs of Police, and I intend to continue lobbying the members of the Transportation Committee and stressing the importance of releasing this crucial public safety measure to the Senate floor with a favorable recommendation as quickly as possible.

Supporters of Molly’s Bill are urged to call their senator and representative in the state Legislature at (617) 722-2000 to express their support for the bill’s passage. Contact information for individual legislators is available at www.malegislature.gov.

Below is a photo of Robert Campbell (center), President of the New England Association of Chiefs of Police holds an EZ-ID license plate with Jay Gardiner (left), Director of the Molly Bish Center and Gary Richard (right), Danvers resident and crafter of the EZ-ID license plate identification system. 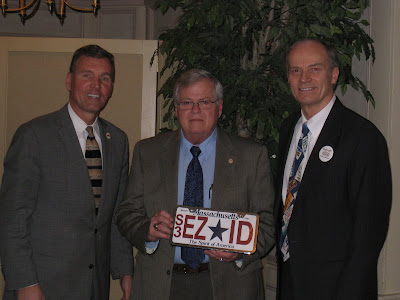 Earlier tonight, Governor Deval Patrick delivered his sixth State of the State address before a joint session of the Massachusetts Legislature. After the speech, I offered my thoughts on the Governor’s remarks and the many challenges facing the Commonwealth during the upcoming year in a video posted below.

I filed this business friendly measure with House Minority Leader Bradley Jones (R-North Reading), and the members of the House and Senate Republican Caucuses in early January to prevent a 31% increase to the UI tax rate. If left unchecked, businesses would be obligated to pay an average additional increase of $220 per employee.

I am proud of the actions taken in the Massachusetts State Senate. Leadership has promptly responded to our calls in preventing an unnecessary burden to small businesses. I look forward to working with colleagues in both parties to secure substantive reforms to the unemployment insurance system that will promote job growth and prevent the need to freeze rates from becoming a yearly issue.

House Docket 4205, “An Act Relative to Mitigating the Increasing Costs for Small Businesses by Freezing the Unemployment Insurance Rate”, received widespread, bipartisan support in the House of Representatives and in the Massachusetts State Senate, garnering 49 co-sponsors of the bill. The measure is now one step closer to law, and if passed, would mark the fourth straight year that similar legislation has been passed.

The legislation now heads to the House of Representative for further consideration.

Media Alert: On the Air with Callie Crossley

Please tune in to today’s Callie Crossley Show on WGBH 89.7FM at 1:00pm where I will be discussing with host Callie Crossley the need for sentencing reform for habitual violent offenders. Today’s show will include guests Les Gosule (whose daughter was a victim of a habitual violent offender), Marc Mauer of The Sentencing Project, and Rev. George Walters-Sleyon from the Center for Church & Prison in Dorchester.

Please click here to read several past posts about sentencing reform, and don’t forget to tune in to WGBH 89.7FM at 1:00pm or click here to listen to today’s lively discussion.

Yesterday I had the opportunity to discuss with Fox 25 Morning News Anchor Shannon Mulaire actions taken by the legislature to limit the abuse of electronic benefit transfer cards (EBT Cards) and additional steps I have proposed. Posted below is yesterday’s segment.

Also, in today’s edition of the Gloucester Daily Times is an editorial discussing the need to increase accountability of state welfare programs. The editorial highlights a bill that I filed that would tighten the oversight of the EBT Cards program. To read today’s editorial please click here.

Media Alert: On the Air with Dan Rea

Tonight at 8:00pm on WBZ Radio (AM1030) I will be discussing with host Dan Rea the abuse of EBT Cards (Electronic Benefit Transfer Cards) and measures the state needs to take to prevent the misuse of the taxpayer funded program. A bill I sponsored, “An Act Preventing the Misuse of Public Funds”, was heard on Tuesday by the Joint Committee on Children, Families, and Persons with Disabilities.

Posted below is a letter I sent to the members of the committee regarding my bill. Please click here or tune in to WBZ-Radio (1030 AM) at 8:00pm to listen to tonight’s broadcast.

Letter to the Joint Committee on Children, Families, and Persons with Disabilties

House Minority Leader Bradley Jones (R-North Reading) and I have joined with our House and Senate Republican colleagues in filing legislation to freeze the currently scheduled unemployment insurance tax rate, citing the current economic climate as the primary reason for such a measure.

If passed, the unemployment insurance tax rate would stay at its current level, preventing an increase of about 31%, with an average cost of $935 per employee, compared to last year’s $715 average tax rate. It would mark the fourth straight year that similar legislation had been passed by the legislature and signed into law.

Unemployment insurance is already a major cost for employers in Massachusetts, and one that relates directly to the number of people they employ. A substantial rate increase now will not only imperil a struggling economic recovery, it will also put a new obstacle in the way of getting people back to work.

On the Air with WGBH's Greater Boston

Media Alert: On the Air with WGBH Greater Boston

Tonight at 7:00pm I will be a guest on WGBH’s Greater Boston with host Emily Rooney. We will be discussing the progress of a habitual offender bill that is currently under consideration by a six member conference committee. Please tune in to Channel 2 at 7:00pm and again at 12:00am tonight to watch our lively discussion.

A Move Toward Accountability

Yesterday the Senate Committee on Ways and Means released S. 2085, “An Act Relative to Improving Accountability and Oversight of Education Collaboratives”, which is intended to establish greater oversight and transparency for educational collaboratives. The bill follows extensive exploration by the Joint Committee on Education of the potential for improprieties in this segment of our educational system. Amendments to the bill must be filed by 5:00 p.m. on Friday, and it will be debated in a formal session of the Senate on Tuesday, January 10th.

A summary of the bill from the Senate Committee on Ways and Means is posted below.

May the New Year bring peace, health and happiness to us all, and many successes as we move forward throughout the year.

“Always bear in mind that your own resolution to succeed is more important than any other.” - Abraham Lincoln