I was very happy to offer an order to have the State Senate adopt a Resolution to commemorate the US Cadet Nurse Corps on the occasion of it's 75th anniversary.  The Corps was created to help train people to ensure that the country had enough nurses to care for its citizens at home and abroad during the second World War.

Resolved, that the Massachusetts State Senate commemorates the us cadet nurse corps on its 75th anniversary; and be it further
Resolved, that a copy of this resolution be transmitted forthwith by the Clerk Of The Senate to the Us Cadet Nurse Corps. 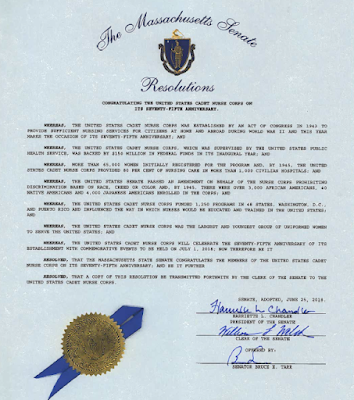