Boston- Members of the state Senate Republican Caucus today encouraged a committee of House and Senate conferees, deadlocked on distracted driving legislation, to return to the negotiating table.

Citing the importance of stemming distracted driving and improving public safety, the Senate lawmakers urged the six committee conferees to reconvene and resume their efforts to resolve differences between bills adopted in each branch.

Five of the Republican Caucus members wrote the letter to the committee while Senator Dean Tran (R- Fitchburg), an appointed member of the committee, issued his own communication urging his colleagues to resume talks.

“While there are some differences in the bills, there is a significant shared core between them that can and should form the basis of a compromise bill,” the letter said. The House adopted bill, H. 3793, “An Act Requiring The Hands-Free Use Of Mobile Telephones While Driving” in May with a 155-2 vote and the Senate approved Senate Bill 2216, “An Act Preventing Distracted Driving”, unanimously in a 40 to 0 vote in a June session.

“We have discussed the merits of legislation to reduce distracted driving for 15 years in the Senate,” said Senate Minority Leader Bruce Tarr (R-Gloucester). “In that time, lives have been lost, families left grieving and another generation has developed dangerous driving habits, I am hopeful that my colleagues will revive their efforts to protect public safety.”

The caucus offered in the letter to provide assistance to the committee, the members of which began deliberating on the two bills in June. 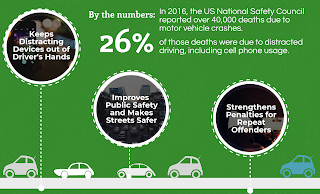