BOSTON - Today, the Massachusetts Senate gave legislative approval to a landmark bill that will rework the state's school funding formula for the state’s public school systems. The bill, the Student Opportunity Act, implements many of the recommendations of the Foundation Budget Review Commission and it devotes $1.5 billion in new funding for schools. Senators gave unanimous support with 39 members voting in favor.

“The Student Opportunity Act represents not moths of analysis and debate but rather years of strong collaboration from Republican and Democrat lawmakers working together to achieve a workable solution that represents a benefit to every school child in every school district in the Commonwealth,” said Senate Minority Leader Bruce E. Tarr (R-Gloucester). “High quality public education is a cornerstone of our state’s history and it remains a key to our success.

The final version of the bill incorporates changes long advocated for by Senator Tarr that were components of the Foundation Budget Review Commission. He also worked to make adjustments to the state’s School Building Assistance Authority funding procedures.

“I want to thank the Minority Leader, Bruce Tarr, who has been working on these issues for many years has been a champion for fixing the formula and was instrumental in the Foundation Budget Review Commission and the work we have done since then to make sure this has been a bipartisan effort,” said Senator Jason Lewis, Senate Chair of the Joint Committee on Education during floor debate. “The process to develop this bill was deeply rooted in collaboration: across legislative chambers and political ideologies, and with the perspectives of stakeholders from across Massachusetts."

The legislation now moves to the desk of Governor Charlie Baker for his consideration. 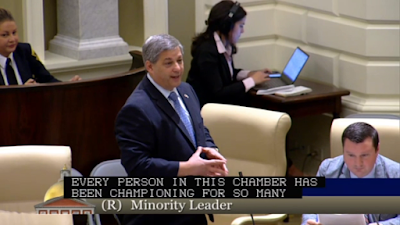