Tomorrow the Senate will debate a bill, Senate 2397, An Act Relative To Pharmaceutical Access, Costs And Transparency, as well as 44 amendments offered by members of the Senate. I have filed several amendments including for drug discount coupon programming, interstate bulk purchasing of pharmaceuticals and a requirement on pharmaceutical makers to disclose payments that they make that are used to influence public policy related to prescription drugs.

Proponents of the bill say a key proposal is to increase access to medicine by placing a cap on expensive prescriptions and by expanding transparency and oversight of costs. The bill establishes an oversight role for the Health Policy Commission to examine more than 400 drugs. These would include any that cost a patient at least $50,000 annually or those that have been deemed as essential medicines.

As an example of a cap under the bill- today was World Diabetes Day at the State House and attendees said that insulin can cost more than $1,000 a year under some insurance plans - the new bill would cap the cost of insulin at $25 a month. 700,000 Massachusetts residents live with diabetes.

While our state is fortunate to have a health care system renowned for high quality we all also recognize that services and prescription meds are often quite costly. The bill has many components and I invite you to read them. You can find it, and the text of the 44 amendments, at this link - https://malegislature.gov/Bills/191/S2397/BillHistory. 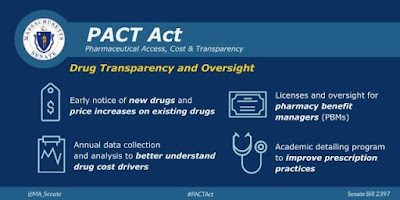