The Cadet Nurse Corps, created by Congress in 1943, was successful in stemming an impending collapse of the nation’s health system. The country’s supply of nurses was desperately low following the First World War and the entry of the United States into World War II further exacerbated the crisis. 180,000 young women were recruited, enrolled and trained to address a critical shortage of available nurses.

“I offered this bill because there should be formal recognition of the contributions that these nurse cadets have made to our state, to the nation and ultimately to the world. Massachusetts has long been at the forefront of nursing education and healthcare and official recognition to honor these women is long overdue,” said Senator Tarr. “The commitment, care and thankless labor of these women, who averaged just 19 years of age, gave life, hope and care to others. They have earned our respect and they deserve our thanks.”

Tarr’s bill received favorable support from the legislature’s Committee on Veterans and Federal Affairs before its vote in the Senate chamber today.

Dr. Barbara Poremba noted that these nurses were members of the US uniformed service and provided 80 percent of the military and civilian nursing care in the then 48 states, Hawaii, Alaska and Puerto Rico.

In addition to the bill which requires an annual issuance of a proclamation by the Governor to set apart the first day of July as the “United States Cadet Nurse Corps Day" Tarr is also pursuing securing a permanent and prominent location in the State House for perpetual recognition of the Corps.

“The State House is our capital building and there are far too few markers or monuments to the impact that women have had on our society,” said Tarr. “I think it’s important that we change that; many of these surviving veterans are now in their 80’s and 90’s we just can’t thank them enough.”

Although the US Cadet Nurse Corps, the largest group of uniformed women to serve the country, was administered by the U.S. Surgeon General and the Public Health Service, it is the only uniformed service that has not yet been given veteran status. Support for further recognition of the nurses is growing as awareness of their significant role has come to light in recent anniversary commemorations of World War II events.

Tarr sponsored a Senate resolution in 2018 recognizing the 75 anniversary of the establishment of the Cadet Nurse Corps in 1943.

The bill, adopted by the Senate, now moves to the House for further consideration.
### 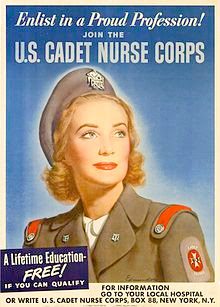