A Special Recognition for US Navy Veteran Douglas Bryant

Middleton resident Douglas Bryant was the guest of honor recently at the Newburyport Veterans Luncheon where Mary Ann Nay, my Community Outreach Specialist, presented him with a Senate citation, jointly with State Senator Diana DiZoglio, in recognition of his dedication and service to our Commonwealth and nation.

Mr. Bryant, now 93 years old, enlisted in US Navy at the age of 17 and went on to serve in World War II, the Korean War, and Vietnam. He retired from the service in 1967 as a Senior Chief Petty Officer.

Mr. Bryant recently authored a book about his experiences, “The Navy Gave Me Shoes”, which describes his training in the Navy Submarine Service. Still a teenager, he first entered the Sea of Japan in 1944. His work was vital and dangerous - one in five submariners did not survive World War II. 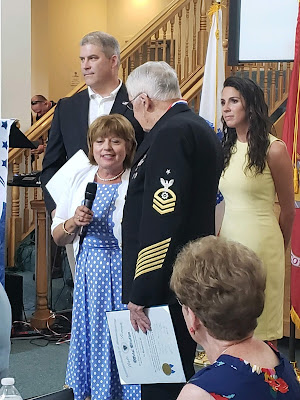