Today the Senate debated the rules that will govern the Senate and the Joint rules that will control the operations of the House and Senate for the 2019-2020 session, and I and members of the Senate Republican Caucus worked with our colleagues to strengthen those rules. More specifically, we offered amendments to the Senate rules that would:
• Require a member to vacate their chairpersonship if they declare for any other state or federal elective office;
• Limit the number of bills to 50 that can be heard in a hearing;
• No member, officer, staff or intern shall engage in identity-based harassment or sexual harassment or retaliate against any State House personnel who has filed a claim or makes a report of identity-based harassment or sexual harassment;
• Require appropriate notice before a meeting of the Steering and Policy Committee;
• Require the clerk to make the calendar for any formal session available to members and the public no later than 3 hours prior to the start of the session. Currently, it is 2 hours;
• Require that there be at least a 30 minute recess before consideration of new matters on the calendar;
• Add one additional member of the minority party on to Senate Ways and Means. Currently, there are 18 members with 3 minority members, this amendment would keep the committee at 18 members but increase to 4 minority members;
• Allow dissenting members on the ethics committee to file a recommendations, advisory opinions and minority reports with the clerk;
• Ensure that the President, when making committee appointments to the Ways and Means Committee allow for 4 positions to be reserved for the minority party;
• Strike the provision that would not allow for reconsideration of orders by the rules committee for the scheduling and consideration of matters on the floor of the Senate;
• Require a member to disclose, in writing, the amount to carry out the proposed legislation which exceeds $100,000;
• Strike the requirement of a fiscal offset for any amendment that proposes revenue increases or spending reductions in excess of $50 million;
• Require that members have adequate time to write and file budget amendments;
• Require that legislative matters receiving a senate number needs to be presented to all the members of the Senate and the public at least 36 hours in advance. Currently it is 24 hours;
• Require unanimous consent for a Senate Session to go beyond midnight;
• Require a 2/3 vote of the members present and voting to go beyond the hour of 10 pm;
• Require a majority of the members by roll call to allow for the use of an electronic voting system; and

And to the Joint Rules that would:
• Require committee votes to be posted online on the General Court website within 48 hours of the vote;
• Require that the Senate and the House make available televised broadcast coverage of all informal sessions in the same manner and format as formal sessions;
• Require that conference committee reports be filed at 5pm for the report to be considered the next day;
• Require expanding the responsibilities of each legislative committee by requiring that it consider the cost-effectiveness of all laws under its subject matter jurisdiction;
• Require any extension order not be beyond 30 days and detail why it is needed;
• Require that the Joint Rules committee establish regulations for the distribution of bills, reports or other documents, including petitions not assigned bill numbers;
• Allow committee members the opportunity to issue a dissenting minority report or sign a form accompanying a report of the committee signifying approval of, dissent or abstention from a report;
• Require independent audits of House and Senate financial accounts be posted on the General Court website;
• Require that any legislative procurement contract for more than $10K be submitted to the state comptroller for posting on the open checkbook website

During today’s debate, we succeeded in securing the passage of the following amendments to the Senate rules:
• Ensuring that at least three positions on the Senate Ways and Means Committee are reserved for members of the minority party
• Ensuring that a reasonable amount of time shall is provided for members to file amendments to the General Appropriations bill and the order setting the amendment deadline is approved by a majority of the members

In addition, we secured passage of the following amendments to the Joint rules:
• Posting votes of Joint Committees online;
• Having the Joint Committee on Rules to study the feasibility of broadcasting informal sessions online;
• Having the Clerks of the Senate and the House of Representatives post the results of the independent audit of joint financial accounts on the General Court website.

We collaborated with Senator Becca Rauch to amend the Senate rules to effectively address and prohibit harassment and retaliation.

You can view the text of all of the amendments considered in today’s debate at: 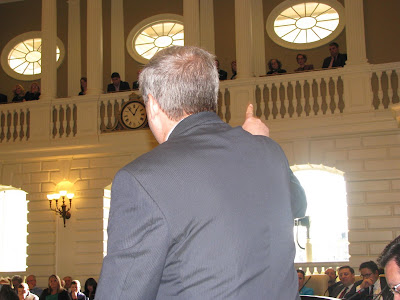