Today my office received from the National Transportation Safety Board their preliminary report on the Over-pressure of a Columbia Gas of Massachusetts Low-pressure Natural Gas Distribution System.


Here is the Executive Summary of the report:

The information in this report is preliminary and will be either supplemented or corrected during the course of the investigation.

On September 13, 2018, about 4:00 p.m. eastern daylight time, a series of explosions and fires occurred after high-pressure natural gas was released into a low-pressure gas distribution system in the northeast region of the Merrimack Valley in the state of Massachusetts.1 (See figure 1.) The distribution system was owned and operated by Columbia Gas of Massachusetts (Columbia Gas), a subsidiary of NiSource. The system over-pressure damaged 131 structures, including at least 5 homes that were destroyed in the city of Lawrence and the towns of Andover and North Andover. Most of the damage was a result of structure fires ignited by gas-fueled appliances. Several structures were destroyed by natural gas explosions. One person was killed and at least 21 individuals, including 2 firefighters, were transported to the hospital. Seven other firefighters received minor injuries.

Fire departments from the three municipalities were dispatched to address the multiple fires and explosions. First responders initiated the state’s fire mobilization plan, that included mutual aid from other districts in Massachusetts, New Hampshire, and Maine.

Emergency responders asked residents to evacuate from the impacted area to four evacuation centers. At the request of emergency management officials, National Grid shut down electrical power in the affected area to remove a source of ignition. Nearby roads were closed, and freight and passenger railroad operations were suspended. Columbia Gas also shut down the low-pressure, natural gas distribution system.[2]

The cast-iron, low-pressure distribution system was installed in the early 1900s and had been partially improved with both steel and plastic pipe upgrades since the 1950s. The low-pressure distribution system in the affected area relied on 14 regulator stations to control gas at the required pressure into structures serviced by the system, unlike high-pressure gas distribution systems that place an individual regulator to reduce pressure at each customer service.[3] Each of the regulator stations reduced the pressure from about 75-pounds per square inch gauge (psig) natural gas main pipeline to 12 inches of water column (about 0.5 psig) for delivery to customers.

Columbia Gas developed and approved the work package executed on the day of the accident. The work package did not account for the location of the sensing lines or require their relocation to ensure the regulators were sensing actual system pressure. The work was performed in accordance with steps laid out in the work package. In light of this accident, Columbia Gas implemented a safety stand-down for all employees who perform work related to low-pressure natural gas systems for NiSource subsidiaries.[4]


Minutes before the fires and explosions occurred, the Columbia Gas monitoring center in Columbus, Ohio, received two high-pressure alarms for the South Lawrence gas pressure system: one at 4:04 p.m. and the other at 4:05 p.m. The monitoring center had no control capability to close or open valves; its only capability was to monitor pressures on the distribution system and advise field technicians accordingly. Following company protocol, at 4:06 p.m., the Columbia Gas controller reported the high-pressure event to the Meters and Regulations group in Lawrence. A local resident made the first 9-1-1 call to Lawrence emergency services at 4:11 p.m.


Columbia Gas shut down the regulator at issue by about 4:30 p.m. The critical valves of the involved natural gas distribution system were closed by 7:24 p.m. Beginning about midnight, crews consisting of two Columbia Gas technicians escorted by two emergency response personnel began shutting off the meters at each house to isolate the homes from the natural gas distribution system. All meters were shut off by the following morning.

According to Columbia Gas, all cast iron and bare steel piping in the affected neighborhoods will be replaced due to system integrity concerns. The new system will consist of high-pressure plastic mains with regulators at each service meter to reduce the line pressure from the main to the required pressure. The Massachusetts Department of Public Utilities is providing oversight of the new system installation to ensure that all work complies with state and federal safety regulations.


The NTSB’s investigation into this accident is ongoing. Future investigative issues include the coordination between the emergency responders and Columbia Gas; an analysis of the engineering work package preparation and execution, including the design documentation; and a review of construction packages for constructability and safety.


4. A safety stand-down is an organized break from work by which employers hold discussions with their employees. They are often taken as occasions to discuss safety topics while also reinforcing the organization’s policies regarding safety in general.


The full preliminary report can be found here: https://www.ntsb.gov/investigations/AccidentReports/Pages/PLD18MR003-preliminary-report.aspx


Below are a few photos provided by the NTSB: 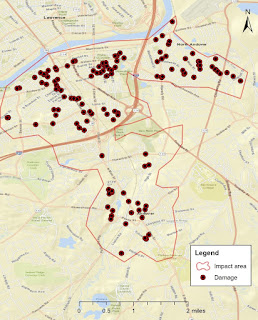 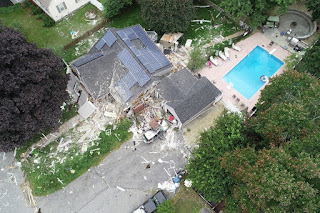 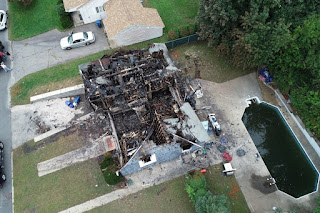