Today, at the Dow Reservoir Dam in Ipswich, the Executive Office of Energy and Environmental Affairs Daniel Sieger, Assistant Secretary for Environment of the Baker Administration announced over $10 million in grants and loans to help cities and towns deal with failing seawalls and dams.

Representative Brad Hill, and Representative Josh Cutler of Duxbury and I were there to welcome and join Assistant Secretary Sieger.

Dams and seawalls are critical pieces of infrastructure for public safety, the protection of our natural resources and our quality of life. Since constructing and maintaining them is costly, it’s imperative that state government partner with our communities to get the job done, and these grants do just that.

The awards are funded by the Dam and Seawall Repair or Removal Fund which I helped to get signed into law with Senator Marc Pacheco and Representative Jim Cantwell in 2013.

Essex, Conomo Point Seawall - $65,650
The seawall is located within Essex Bay. Much of the area surrounding the point is made up of salt marsh and highly productive clam flats. The seawall on the point is now in a deteriorated state and suffered failures in the 2018 winter storms. Of particular importance at this location is the presence of a boat launch used by the Essex emergency services and the Massachusetts Environmental Police. In many tide conditions, other launches in the town are not usable and this is the most viable launch site. The seawall helps to protect Conomo Point Road – the only land access to the launch site. Conomo Point Road is also the route used by many of the town’s commercial shellfishermen to bring their product tom market.

Ipswich, Dow Reservoir Dam - $711,954
Dow Reservoir Dam is an important element of the water supply system. Built in 1894, it is the largest reservoir in Ipswich and it supports over half of the town’s surface water. The dam sits directly above the Ipswich Electric Light Department 9.2MW generating station and distribution substation.

Rockport, Long Beach Seawall and Revetment - $750,000
The Long Beach Seawall in Rockport suffered substantial damage over the winter of 2018. This structure had already been designated for substantial repair and the Dam and Seawall program awarded a design and permit grant in fiscal year 2018. This project will implement key stabilization work on the wall and will serve to protect homes and the wetlands behind. Repairs will include placement of new revetment seaward of the existing wall and addition of 8,000 yards of sand to nourish the beach. 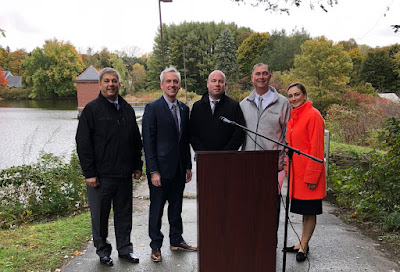