Today, I was honored to have the support of many colleagues in the Senate as we adopted my resolution to recognize September as National Sepsis Awareness Month. Gloucester resident Ronnie Robertson has worked with me, and others, over the years to raise awareness of this life-threatening illness.

Sepsis is the body’s overwhelming response to infection that can lead to tissue damage, organ failure, and death. In other words, it’s your body’s over active and toxic response to an infection.

Your immune system usually works to fight germs (bacteria, viruses, fungi, or parasites) to prevent infection. If an infection does occur, your immune system will try to fight it. What happens when the immune system stops fighting the germs and begins to turn on itself? This is the start of sepsis.

Sepsis is not diagnosed based on an infection itself. If you have more than one of the symptoms of sepsis, especially if there are signs of an infection or you fall into one of the higher risk groups, your doctor will likely suspect sepsis.

Severe sepsis includes organ dysfunction, such as difficulty breathing (problems with the lungs), low or no urine output (kidneys), abnormal liver tests (liver), and changes in mental status (brain). Nearly all patients with severe sepsis require treatment in an intensive care unit. Sepsis has been named as the most expensive in-patient cost in American hospitals at nearly $24 billion each year. Early awareness is critical because forty percent of patients diagnosed with severe sepsis do not survive. 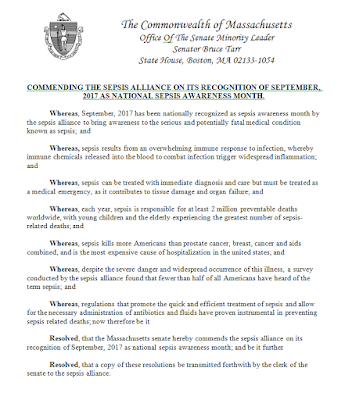 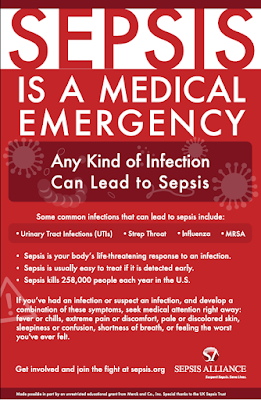