Today I was pleased to participate on a panel at the Municipal Climate Change Summit held by the Baker-Polito Administration to mark the one year anniversary of Executive Order 569, “Establishing an Integrated Climate Change Strategy for the Commonwealth.” The Order provides collaboration between the Office of the Governor, the Executive Office of Energy and Environmental Affairs, the Executive Office of Public Safety and Security, and key state, local and environmental stakeholders. Furthermore, the Order lays out a comprehensive approach to further reduce greenhouse gas emissions, safeguard residents, municipalities and businesses from the impacts of climate change, and build a more resilient Commonwealth.


Posted below is a press release describing the event and some photos from its proceedings: 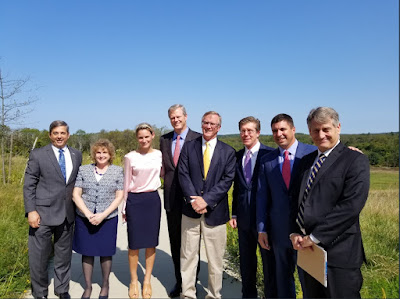 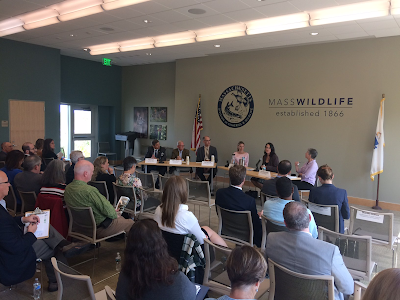 BOSTON – To mark the one-year anniversary of Executive Order 569, “Establishing an Integrated Climate Change Strategy for the Commonwealth,” the Baker-Polito Administration today held a Municipal Climate Change Summit to report on the ongoing implementation of the Order, announce several new climate change initiatives, and provide an opportunity for communities across the state to come together to learn more about the administration’s Municipal Vulnerability Preparedness (MVP) program. The Summit is part of Climate Week – a series of events to highlight Massachusetts’ efforts to prepare for and combat climate change and to celebrate the one year anniversary of Governor Baker’s signing of Executive Order 569. The Order, which builds on the administration’s nation-leading efforts to reduce emissions, lays out a comprehensive approach to further mitigate greenhouse gas emissions, safeguard residents, municipalities and businesses from the impacts of climate change, and build a more resilient Commonwealth.

“Last fall, I was pleased to sign Executive Order 569 and outline an integrated strategy to continue reducing emissions under the Global Warming Solutions Act, build resiliency in our cities and towns, and direct new efforts to work across state government in each Executive Office,” said Governor Charlie Baker. “Today, we recognize the significant progress Massachusetts has made to implement the Order and discuss plans for reducing emissions in the transportation sector, set an emissions reduction target for 2030 under our Global Warming Solutions Act, and launch a suite of new climate change planning tools that will help cities and towns and state government prepare for and adapt to climate change across the Commonwealth.”

“Joining with our municipal partners, state legislators and environmental advocates through the Municipal Climate Change Summit is a perfect way to celebrate Climate Week and mark the Anniversary of Executive Order 569,” said Lieutenant Governor Karyn Polito. “Partnerships with cities and towns are a cornerstone of our work in the Baker-Polito Administration, and we’ve carried this approach into our nation-leading efforts on climate change. We look forward to our continued partnership with local leaders to combat and mitigate the effects of a changing climate.”

At the summit attended by over 150 municipalities, environmental advocates and other stakeholders, Governor Baker reinforced the Commonwealth’s commitment to reducing greenhouse gas emissions by announcing the Administration would work next to curb emissions from the transportation sector. To help the administration move forward on this issue, three public listening sessions will be held in the coming months for stakeholders from across the state to identify regional policies to reduce emissions, develop a comprehensive regional strategy for the deployment of electric vehicles, and discuss strategies to increase the resilience of transportation infrastructure.

“The Baker-Polito Administration has worked aggressively across the state and with regional partners to reduce emissions and to ensure that we meet the limits established under the Global Warming Solutions Act. Our next target for new policies that will lead to further reductions is the transportation sector and we’re looking forward to rolling up our sleeves and finding solutions,” said Energy and Environmental Affairs Secretary Matthew Beaton. “At the same time, we’re committed to dealing with the ongoing impacts of climate change by working across state government through our Climate Coordinators and providing the best science, planning tools, and technical support to help prepare our cities and towns, last year spending over $150 million on adaption and mitigation efforts.”

In an effort to continue progress towards the Commonwealth’s goal of 80 percent emission reductions by 2050, over the next year the Executive Office of Energy and Environmental affairs will work to establish an interim emission reduction target for 2030 pursuant to Executive Order 569. This process will be through development of the Clean Energy and Climate Change 2030. The Executive Office will work with the Implementation Advisory Committee of the Global Warming Solutions Act to study and set a target for 2030.

Additionally, Governor Baker announced the release of statewide climate change projections developed through a partnership between the state and the Northeast Climate Science Center at UMass-Amherst. Working with scientists at the Center, the Commonwealth is releasing data that shows how temperature and precipitation will change over this century, data on coastal sea level rise and storm surge with coverage for the entire coast, and hydrological data to examine inland flooding in our river basins. The data will be freely available to the public on a new statewide climate change website to be launched this fall.

“Stronger and more frequent storms in the future would mean more costly damages to our infrastructure, stress our social services, and possibly lead to greater loss of life or injury,” said Secretary of Public Safety and Security Daniel Bennett. “To mitigate these risks we have partnered with the Executive Office of Energy and Environmental Affairs to develop a first of its kind integrated State Climate Adaptation and Hazard Mitigation plan that will develop strategies to deal with climate change impacts and other natural hazards.”

“Reducing emissions from the transportation sector is difficult and we need all of our best ideas at the table,” said Transportation Secretary and CEO Stephanie Pollack. “I’m delighted that we’re announcing these 3 listening sessions to gather feedback on how we can significantly reduce emissions from this sector by working across the region with partners, deploy new technologies, and ensure that as we continue to deal with the impacts of climate change our roads, bridges, and other critical infrastructure are able to withstand heavy rain, wind, increased heat, and other extreme weather.”

At the core of the administration’s efforts on climate change is working to create a strong partnership between state government and our cities and towns who are on the front lines of climate change. Under the Commonwealth’s new Municipal Vulnerability Preparedness program, we’ve announced grant awards totaling over $1.1 million to 20% of the communities in our state. To help communities complete this program, our Executive Office of Energy and Environmental affairs, working in strong partnership with the Nature Conservancy has put together a training program and a new community resilience building guide that will walk cities and towns through the climate change projections and the planning process for assessing risk and identifying priority actions. This guide will be sent out to all communities who are enrolled in the MVP program in early October.

In the year since signing Executive Order 569, the Baker-Polito Administration has taken numerous steps to mitigate and adapt to climate change, including:

Issuing final regulations that build upon the Commonwealth’s nation-leading efforts to further reduce greenhouse gas (GHG) emissions and protect communities, residents, and infrastructure from the impacts of climate change;

Initiating a first in the nation state climate adaptation and hazard mitigation plan that will cover all sectors of government, municipalities, natural resources, and local economies;

Producing a vulnerability assessment framework for state agencies; and

Developing a vulnerability assessment framework and technical assistance programs for cities and towns and distributing over $1.1 million dollars to these communities to aid their efforts.

“We are proud to collaborate with the Baker-Polito Administration on nation-leading initiatives to reduce and address climate change,” said Wayne Klockner, State Director of the Nature Conservancy in Massachusetts. “Our efforts will help communities and the Commonwealth lead by example to enhance safety, avoid costs, and conserve natural resources.”

“Our leadership on climate change is now more vital than ever to reduce the future threat of global warming and keep Massachusetts healthy, strong and sustainable,” said Senate President Stan Rosenberg (D-Amherst). “Commemorating the results we have achieved together to address the future impacts of climate change in partnership with our communities ensures we are doing our part to conserve the Commonwealth for generations to come.”

“Our coastal communities are threatened by sea level rise, our oceans are warming and our entire state is threatened by extreme weather events,” said Senate President Pro Tempore Marc R. Pacheco (D-Taunton), founding chair of the Senate Committee on Global Warming and Climate Change. “Given these realities, I am pleased that the administration is continuing to move forward in reducing our greenhouse gas emissions, attempting to meet the legal requirements of the Global Warming Solutions Act and fighting the immense threats of climate change – all of which negatively impact our economy, environment and public health. We must move beyond these existing orders in our legislative session to codify a climate adaptation management plan in statute, as the Senate has done three times. The transportation sector is our largest greenhouse gas emitter, and I’m pleased that the administration is looking at what we can do to lower those emissions. I look forward to working with them on strategies to protect our Commonwealth while using the research provided in our work with Georgetown University’s Transportation and Climate Initiative, along with the best practices of California.”

“Responding to climate change is a daunting task and a priority, one which requires focused efforts at all levels of government. Governor Baker’s Executive Order is bringing that focus to major initiatives in state government and capitalizing on the tools provided by the legislature to make progress on this front,” said State Senator Bruce Tarr (R-Goucester). “In turn, municipal leadership and action is continuing to move our state forward to build resiliency through adaptation.”

In addition to the new regulations and last summer’s bi-partisan, comprehensive energy legislation, to further reduce emissions and accelerate state and regional efforts to combat climate change while continuing to grow the economy, Massachusetts worked collaboratively with eight other Northeastern and Mid-Atlantic states participating in the Regional Greenhouse Gas Initiative (RGGI) to finalize negotiations for a new program. The plan aims to reduce greenhouse gas emissions beyond 2020, and calls for an additional 30 percent cap reduction between 2021 and 2030, relative to the RGGI 2020 levels.