This morning, I had the honor of recognizing outstanding individuals who exemplify the very meaning of service-based organizations in celebration of Parliamentary Law Month and George Demeter Day.  I felt privileged to welcome representatives of the George Demeter Unit of the National Association of Parliamentarians, the Boston Chapter of the Order of the American Hellenic Educational Progressive Association, which is the largest Greek-American organization in the world, and the Hellenic Bar Association.


George Demeter was best known as the first Greek-American elected to serve in the Massachusetts House of Representatives in 1932, ultimately serving two-terms.  He also authored Demeter’s Manual of Parliamentary Law and Procedure, a manual with parliamentary rules and procedures to prepare anyone seeking to become a certified parliamentarian.  Prior to getting elected, Demeter was heavily involved with the American Hellenic Educational Progressive Association, serving as President of the Boston Lodge.  According to Boston Globe accounts, the inclusion of Greek traditions in the annual Boston Marathon such as crowning the winners with a laurel wreath and presenting them a bronze medal from Athens was started, in part, by Demeter. 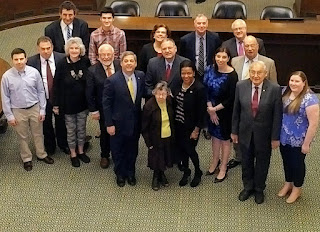 Senator Linda Forry and I had the opportunity to assemble a group picture with the representatives from these organizations. 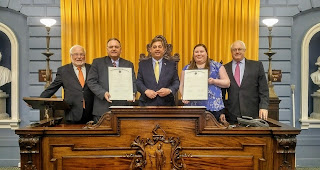 Representing these distinguished organizations today (pictured from left to right) were President Frank Fotis, and his wife Maryned, of the Boston Chapter of the Order of the American Hellenic Educational Progressive Association, former President of all three organizations Peter A. Senopoulos, who is also the great-Grand Nephew of George Demeter, along with his wife Jane, and President Kendra O’Toole and Michael Malamut of the George Demeter Unit.