August 15 and 16 Slated for Tax Free Weekend
Boston- Consumers will be given an opportunity to shop without paying a state sales tax under a bill adopted by a 27 to 11 vote in the Senate today. Senate Minority Leader Bruce Tarr (R-Gloucester) a prime advocate for the tax holiday called the tax suspension a boon for shoppers and shop keepers.
“The tax holiday will generate sales, put people to work, save consumers money and reduce the risk that back-to-school shoppers will make purchases in New Hampshire or online,” said Senator Tarr.
Tarr’s original bill establishing a permanent sales tax holiday for one weekend per year was used as the legislative vehicle by the Economic Development and Emerging Technologies Committee to authorize a one year tax reprieve on August 15 and 16 on items less than $2,500. The tax holiday has been offered to consumers annually since 2004 with one exception in 2009.
Senator Tarr presented the Senate with several amendments; one would extend the tax break on a permanent basis, another would set a three year extension of the holiday followed by a sunset in 2018.
“The sales tax holiday is a limited but effective way to give families some modest relief from a sales tax that should be reduced from its current rate for lasting benefits every day. Until that can be advanced, the measure approved today by the Senate will help consumers, prevent sales from migrating out of Massachusetts and to the Internet, and boost the economy through increased employment and business investment,” said Tarr.
Advocates for the August tax free weekend, including Senators Eileen Donohue (D –Lowell) and Donald Humason (R – Westfield), said that the overall impact for consumers would be a net plus.
Retailers Association of Massachusetts reports that the retail sector employs an addition 627 workers as a result of the tax holiday. They say that consumer spending rises in Massachusetts during the tax holiday and reduces sales that might otherwise migrate to New Hampshire or online. According to a recent Beacon Hill Institute survey, 72% of respondents say they are more likely to shop nearby and keep spending local instead of buying online or in New Hampshire. 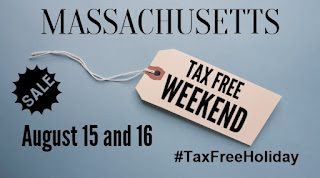