Posted below is a press release that I sent out today regarding a sex offender registry board reform bill that was heard by the Joint Committee on the Judiciary this afternoon: 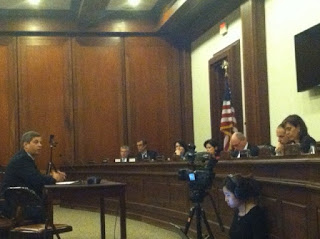 
BOSTON – Senate Minority Leader Bruce Tarr (R-Gloucester) testified before the Legislature’s Joint Committee on the Judiciary this afternoon, calling for the passage of legislation that will enhance information-sharing among the state’s public safety agencies and ensure that sex offenders are properly classified and monitored.


Tarr is the lead sponsor of Senate Bill 815, An Act Enhancing Assessment Information of the Sexual Offender Registration Board, which has the bi-partisan support of 26 House and Senate members, including the entire Senate Republican Caucus and many Democrats who have signed on as co-sponsors.  The bill was filed following the December 2012 indictment of Wakefield resident John Burbine, who was classified as a Level 1 offender despite being the subject of several investigations since 1989 and is now facing multiple counts of child sexual abuse.


“For too long our systems for dealing with sex offenders have tolerated a lack of information, a lack of transparency, a lack of communication between those charged with protecting us, and a lack of proper tools to access, classify and reclassify those who have committed these crimes,” said Tarr.  “Now, the Legislature must act, in a responsible and effective way, to empower citizens, law enforcement officials and the Sex Offender Registry Board to strengthen public safety and prevent victimization.  The Judiciary Committee has before it bills of ample number and scope to get the job done, and it’s imperative that it move as soon as possible to action.”


Highlights of Senate Bill 815 include:


·         a requirement and authorization for law enforcement agencies and prosecutors to communicate with the Sex Offender Registry Board (SORB) in a timely fashion about the commitment of subsequent offenses by a registered sex offender;


·         the legal authority of the SORB to re-classify sex offenders based on new information, which was taken away by the Massachusetts Court of Appeals on July 16, 2012 in its ruling in the case of John Doe 16748 v. Sex Offender Registry Board (Docket Number 11-P-308);


·         the ability of the SORB to expedite the re-classification process of a sexual offender upon the recommendation of law enforcement and prosecutors; and


In addition to Senate Bill 815, Tarr is sponsoring several other sex offender bills on behalf of Protect Mass Children that were heard by the Judiciary Committee today, including:


·         Senate Bill 802, which would require out of state classified sex offenders who enter Massachusetts to register with the SORB within two days of moving into the Commonwealth, and would require that this information be shared with the local police department in which the sex offender resides;


·         Senate Bill 804, which would impose a mandatory minimum of life imprisonment with no parole for any person convicted three or more times for any sex offense against a child, person with disabilities, mental handicap, or elder;


·         Senate Bill 805, which would eliminate the statute of limitations for child sexual abuse, with a three-year retroactive window;


·         Senate Bill 811, which would require information on all registered sex offenders (Levels 1, 2 and 3) to be provided by the SORB to the public, both online and at local police departments; and


·         Senate Bill 814, which would extend from 60 to 90 days the time frame in which the SORB must notify the offender of his right to submit evidence of his risk of re-offense/dangerousness prior to the offender's scheduled release from prison, and limit the time the offender has to submit the evidence to the board to 30 days.