On Wednesday family members, law enforcement officials, legislators and others gathered at the Massachusetts State House for the 12th annual commemoration of Massachusetts Missing Children’s Day, a solemn remembrance sponsored by the Molly Bish Foundation. The event, moderated by Magi Bish, whose daughter Molly was lost in 2000, featured touching accounts by family members and speeches by elected officials, all centering around a common theme of “In Our Hearts Forever”. Also in attendance were family members of Caleigh Harrison, the little girl from Gloucester who has been missing since April 19.

During the event I was recognized for my work on behalf of missing children with a special award in “Appreciation for Your Many Contributions” by the Molly Bish Foundation. I have worked on a number of initiatives supported by advocates for missing children, including comprehensive legislation passed last year to combat human trafficking, and pending legislation to reform the state’s license plate system.

That legislation, named “Molly’s Bill” in honor of Molly Bish, would simplify general issue license plates in Massachusetts by reducing the number of alphanumeric characters on each plate, and utilizing commonly recognizable symbols to improve recognition and recollection of license plates in times of emergency. Current six-character plates can yield matches of approximately 1 n 4,300 vehicles when combined with information about a vehicle’s color and at least 3 license plate characters, whereas the EZ-ID system contained in Molly’s Bill has the potential to reduce matches to approximately 1 in 123 when combined with information about a vehicle’s color, the symbol on the license plate and at least 2 alphanumeric characters.

We need to keep our efforts to protect children and prevent tragedies in the forefront, and today’s ceremony reminds us of why it’s important to provide law enforcement officials, families and concerned citizens with every possible tool to promote the safety of our children.

I encouraged everyone who was unable to attend yesterday’s event to express their support for Molly’s Bill, S.1798, by calling legislators as soon as possible. Information about the bill is available at www.ez-id.org, and legislator contact information is available at www.malegislature.gov/People. Below is a picture of me with members of the Bish family and missing children advocates at the rostrum in the Senate Chamber. 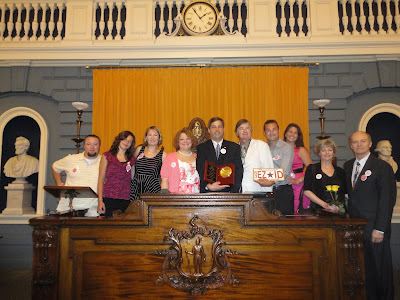