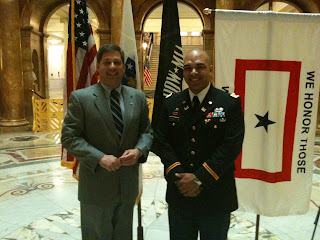 State Representative Bradford Hill and I are hosting an event honoring the United States Army Community Covenant Program at the State House on Monday, June 28th at 1:00pm. Recently a Joint Resolution was passed by the House of Representatives and the State Senate that expresses support for this program and will be presented to several representatives of the U.S. Army in front of the Grand Staircase.

The United States Army Community Covenant Program establishes a community-based partnership with a municipality and serves to recognize support for local troops and their families as well as the sacrifices demonstrated by them. In return, local soldiers have proven their support for these communities by assisting with neighborhood programs, schools, organizations, parades, flag raisings and other volunteer based services. Thus far many communities have entered into these covenants, including Billerica, Salem, Ipswich, Lowell and Peabody.

This is a public event and all are welcome to attend. Light refreshments will be served at the conclusion of the program.