Recognition from Common Cause 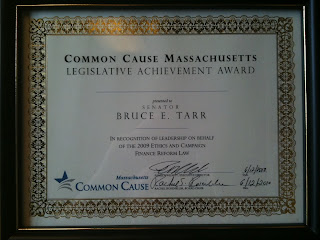 Recently Common Cause Massachusetts presented me with a Legislative Achievement Award for my work on the 2009 Ethics and Campaign Finance Reform Law.

I am honored to receive this award from Common Cause; reforming our ethics laws is a major priority, and the legislation we developed and passed significantly responds to that priority. The new law reflects a bipartisan effort to move in the right direction.

I served as a member of the six-legislator conference committee that authored the final version of the ethics law, and have been a consistent and strong advocate of reforms to increase transparency and accountability in state government.

Pamela Wilmot, the Executive Director of Common Cause said, “Common Cause is pleased to recognize Senator Tarr and all the members of the conference committee that worked so hard on the 2009 Ethics, Lobbying, and Campaign Finance Reform Law. This legislation was a tremendous accomplishment and the most comprehensive reform in decades. We thank Senator Tarr and the other conferees for their work on this important reform.”

Common Cause is a non-partisan, non-profit organization that works to ensure an open and accountable federal, state, and local government. The organization works to ensure that officials serve the public interest openly and honestly. Common Cause has advocated in establishing a state ethics commission as well as an inspector general’s office. They have been essential in opening the state legislature to televised broadcasts, preventing the elimination of state watchdog groups, and protecting citizen ballot initiatives. Common Cause has also been instrumental in reforms in the campaign finance laws as well as redistricting procedures.