According to the Essex Police Department and the Massachusetts Department of Transportation travel over a temporary bridge is open today with a restriction on any commercial vehicles with more than 4 axles. A lane curvature of the temporary structure would cause large vehicles, such as tractor-trailers, to encroach on the opposing travel lane. Truck traffic eastbound and westbound will be detoured around the Essex River crossing via the following route:

Commercial trucks with 4 axles of more will be detoured right on to Martin / Western / Essex Street (Route 22),

Then left on to Woodbury Street,

Then left to Grapevine Road,

Then take the ramp to Route 128 northbound to exit 50,

At the end of the ramp take a left on to School Street / Southern Avenue and follow back to Route 133.

Commercial trucks with 4 axles of more will be detoured left on to Southern Avenue / School Street to Route 128 southbound to exit 48,

Then right at the end of the ramp to Grapevine Road

Then right on to Woodbury Street,

This temporary bridge is to remain in place for approximately 20 months, at which time traffic will be diverted to its original configuration on the new bridge.
The work under this $5.4 million contract consists of the full replacement of the bridge on Route 133 (Main Street) over the Essex River. 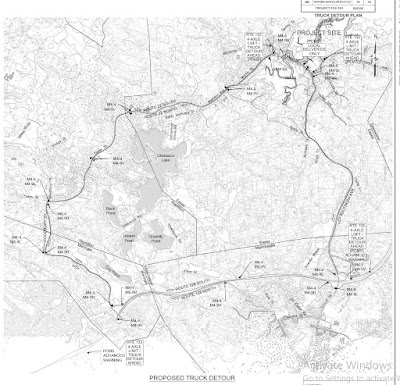