The event is a day-long exhibition of vintage military vehicles, equipment, military reenactors, speakers – both veterans and academics – and other veteran-related attractions, held on the grounds of the home of one of America’s most famous and celebrated military families. The day also recognizes and honors the 100th anniversary of the A.P. Gardner American Legion Post in its efforts to support veterans and their families in Hamilton MA.

Admission is FREE to the public. In addition, American Legion: Post 194 (Hamilton, MA) hopes to bring public awareness to the Town of Hamilton Patton Homestead itself and to promote the Wenham Museum’s Patton Family Archive, which is located in the Homestead. The Patton Homestead in Hamilton, Massachusetts is the family home, for over 90 years, of General George S. Patton,, his son General George Smith Patton, and his wife Joanne Holbrook Patton, a pioneer Army Social Services innovator during the Vietnam War. 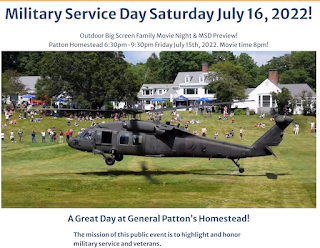