Thanks to Billy Joel and the Boston Red Sox, a raffle is being held this August to support commercial fishing communities.

Having one of the most dangerous occupations in America, commercial fishermen risk their lives to bring fresh seafood to our tables and have suffered during the pandemic. The raffle is an opportunity for seafood consumers and coastal residents to show their support for commercial fishing communities. Proceeds from the raffle support vital programs that improve the health, safety, and economic security of commercial fishermen and their families.

o On August 4th, join nearly 60 members of the commercial fishing industry at Fenway Park where Billy Joel will perform on his piano. Concert goers are likely to hear Downeaster Alexa, a song Joel wrote about the fishermen in Oyster Bay, Long Island that brings attention to the challenges fishermen face and the hard work they put into their jobs.

Aug. 5 Event Celebrates Gloucester Wives Memorial On August 5th starting at 7 p.m. the public is invited to CENTURIES IN THE MAKING: Gloucester Wives & Fishermen Shine On - an event celebrating the 20th anniversary of the Gloucester Fishermen's Wives Memorial. Guests will gather along Stacey Boulevard, hear from speakers that include Gloucester Fishermen’s Wives Association President Angela Sanfilippo and guest of honor Massachusetts Attorney General Maura Healey. The 1-hour speaking program starts at 7:30 and will be followed by a light and sound installation by luminArtz, an organization that specializes in producing nighttime art festivals.

Gloucester Fishermen's Wives Association - Promoting the Gloucester and New England Fishing Industries and the quality of life for active and retired fishermen and their families. 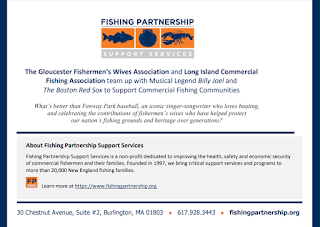