Today, Governor Baker held a virtual ceremonial signing of an important new law- An Act Promoting Awareness of Sewage Pollution in Public Waters. I am proud to have worked on this bill because I believe that the discharge of pollution is a serious event made even more so when it is dumped directly into one of the public drinking water sources. The public should have access to information about sewage into waterways so that they can avoid exposure to contaminants which could pose serious health risks.

The Merrimack River, one of New England’s largest sources of public drinking water, has much of the pollution that is discharged into it coming from out of state. This new law will help us to do more to promote the health and safety of the river and those who rely on it going forward.

Experts tell us that each year, nearly 3 billion gallons of raw or partially treated sewage is discharged to the state's waterways. The new law requires the Department of Environmental Protection to provide information about discharge notifications on its website. Those who operate sewer systems will need to issue public advisories within two hours of a discharge and every eight hours until the discharge has ended.

Several members in the Senate have been firmly dedicated to expanding public awareness of river discharges particularly, Senator Diana DiZoglio of Methuen, Senator Edward Kennedy, of Lowell, Senator Barry Finegold of Andover, and Jamie Eldridge of Acton, and I am glad that we have worked collaboratively to get this bill to Governor Baker’s pen. 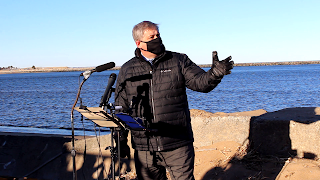