Boston - Massachusetts Senate Republicans are seeking greater openness and transparency through a series of proposed changes to the rules governing the way the legislature operates, Senate members of both parties are working to make substantive reforms to the rules that govern their process of lawmaking.

"The Senate has made great strides over the past several years in improving the transparency and accountability of the legislative process through strong bipartisan efforts," said Senate Minority Leader Bruce Tarr ( R - Gloucester ), who added that "Now we have a tremendous opportunity to continue those efforts for the benefit of members, the public, and the legislative process."

Filed as amendments to be considered by the Senate as it adopts rules governing the 2021- 2023 legislative session, the proposals include measures to give legislators and the public more time to read legislation prior to floor votes by:

* Requiring conference committee reports to be filed by 5 PM;

* Requiring at least 72 hours between the filing of a conference committee report and its consideration for approval by the House and Senate;

* Requiring at least 72 hours for amendments printed in the Senate Calendar to be read before being taken up by the Senate;

* Requiring 7 days for Senate members to read and analyze budget proposals and amendments; and

* Requiring at least 15 mins for members to read and analyze a redrafted or further amendment before they can be considered.

In addition to providing more time for members, the public, and the press to review legislative proposals the Senate Republicans are also proposing amendments to increase transparency, predictability, and the opportunity for civic engagement by:

* Preventing the Senate from meeting past midnight, except by unanimous consent of the members;

* Requiring a recorded vote for the Senate to continue in session past 10 PM;

* Codifying that all informal session be broadcast in a manner similar to those during the public health emergency; and

* Ensuring that legislative amendments must be made publicly available.

The Republican Caucus amendments have been filed as part of the process by which the legislature adopts rules as one of the first acts of a new legislative session. They are intended to build on a rules proposal released by the Senate's Temporary Rules Committee, which filed its report on Thursday, February 8.

The Republican caucus is not alone in seeking changes to the rules, as several Democrats have also filed amendments containing substantive changes to the rules that govern the process of lawmaking. Together, members of both parties have filed 51 amendments to Senate Bill 10, “Proposed Senate Rules for the 2021-2022 Legislative Session” and 16 amendments to Senate Bill 11, “Proposed Joint Rules for the 2021-2022 Legislative Session”.

Senator Ryan Fattman (R- Sutton ), a member of the committee, said "The public deserves adequate time and careful consideration of proposed laws by their elected officials. Anything short of that is unacceptable." Senator Fattman continued by saying, "Requiring more time to read and consider legislation only helps establish more understanding, transparency, and accountability in legislating. Providing that time and increasing accessibility of information also gives those outside the ranks of the legislature a greater opportunity for civic engagement."

Tarr, also a member of the Senate's Temporary Rules Committee, Fattman, and Senator Patrick O'Connor (R- Weymouth) emphasized that this rules initiative is intended to improve the lawmaking process not only for the members of the minority party but for all legislators as well as people concerned with how decisions are being made on their behalf.

v “It is critical for the strength of our democracy that we provide timely and accurate information regarding legislation that is being debated or acted upon,” said Senator O’Connor (R-Weymouth). “This should be done not just for the elected officials debating policy, but so that the public may have time to provide their opinion to those deciding policy. We have proven the importance of these steps with actions we have taken in the past, and hopefully we can do so again as we begin this legislative session.”

v The Senate is scheduled to debate the rules reports on Thursday, February 11th. A live stream of the session will be webcast www.facebook.com/SenatorBruceTarr at ! 11:45 AM. 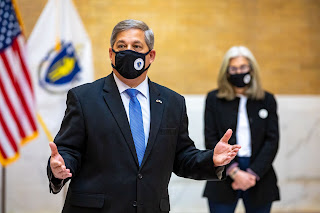