On Monday I had the opportunity to join with a host of State and Federal officials to break ground for the $17.4 million Haverhill Commuter Rail Project, which is being funded through the American Reinvestment and Recovery Act. The project will include the installation of a second track and improve signalization on the Haverhill/Reading Line of the MBTA Commuter Rail System. The line runs north from downtown Boston through Malden, Melrose, Wakefield, Reading, Wilmington, Andover, Lawrence, North Andover and Haverhill.


Please click on “Read more” to read a press release with details of the event and the project. 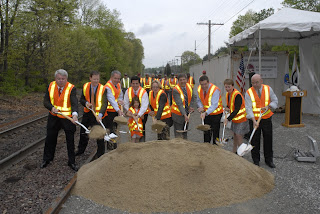 "We have made it a priority to invest in maintenance and repair projects like this one that will improve the experience for commuter rail and transit riders throughout the Commonwealth," said Governor Patrick.

"Our administration is committed to improving our rail infrastructure and commuter rail customer service," said Lieutenant Governor Timothy Murray. "Thanks to the support of our congressional delegation and the Recovery Act funds, we will strengthen commuter rail service along the Haverhill line, offering more service for residents as well as economic and community development in the region." ‪

"These Recovery Act funds will create jobs by improving our public transportation infrastructure and decreasing commute times for residents along the Haverhill line," said Congresswoman Niki Tsongas. "This is an excellent investment and I want to thank Governor Patrick and Lt. Governor Murray for their continued efforts to derive the broadest benefit for the Commonwealth from these federal funds."

"This project will greatly improve the reliability of the Haverhill Commuter Rail Line and provide riders with much better on - time performance in their daily commutes, " said Mary Beth Mello, FTA Deputy Regional Administrator.

The ARRA project will improve reliability and service for Haverhill commuter rail line customers with the installation of a double-track along the Haverhill line and improvements to the train control systems that have affected on-time performance. It has already resulted in the hiring of twelve new construction jobs to help complete the required work.

The double-track will allow trains to use a new second track to maneuver around disabled trains and maintain service near scheduled levels. New signal systems and track circuits will enhance system reliability and safety for passengers and at crossing through neighboring cities and towns.

"Access to the commuter rail is one of Haverhill's strongest assets", said Senator Steven A. Baddour (D-Methuen). "Double tracking the line has been one of my highest priorities as Senate Chairman of the Joint Committee on Transportation. This enhancement will certainly improve service between Haverhill and Boston and will better serve the many families and commuters who rely on public transportation."

"Adding a second track between Lawrence and Andover is a huge win for Merrimack Valley commuters and businesses. This will greatly improve commuter rail service, making it a more reliable, efficient, and attractive way to travel between the Merrimack Valley and Boston," stated Senator Sue Tucker.

"Safe and efficient rail infrastructure is important for the economic future of our region and our state. This project is an investment in that future," said Senator Bruce Tarr.

"Residents in the area have requested more train service," said Representative Barry Finegold (D-Andover). "This funding will help make this a reality."

"This stimulus funding will address the critical need to enhance the safety and reliability of the Haverhill line for those commuters to depend on this service daily. Projects like these are essential to repairing vital infrastructure that will create jobs and boost the economy" said Representative Brian S. Dempsey.

"MassDOT's mission is to strengthen safety and customer service and this project will do both for commuter rail customers along the Haverhill line," said Secretary Mullan.

"This project is a huge investment to improve service for customers while at the same time put people to work," said MBTA General Manager Richard A. Davey. "Congratulations to the new hires."

The Haverhill/Reading Line runs north from downtown Boston through the cities and towns of Malden, Melrose, Wakefield, Reading, Wilmington, Andover, Lawrence, North Andover, and Haverhill. Completion of the double-track work is slated for December 2010, with the signal project to begin in 2011.