A Call for Serious Reform 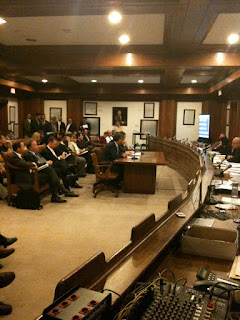 Recently there have been widespread and serious allegations of improper acts by the Essex Regional Retirement Board. These allegations, from such sources as the Public Employee Retirement Administration Commission (PERAC) and the Essex District Attorney, compel action to reform the board. Working with the members of the Northeast Legislative Caucus, which I co-chair, as well as town officials from throughout the region, I developed reform legislation which was filed today with the co-sponsorship of other members of the House and Senate from both parties.

A press release which summarizes the bill is posted in the Read more section below.

Boston- Taking strong action in response to many serious allegations of improper acts by the Essex Regional Retirement Board, State Senate Assistant Minority Leader Bruce Tarr (R-Gloucester) and many members of the legislature’s Northeast Legislative Caucus have filed legislation to reform the operations of the board to ensure the it operates with accountability, transparency and respect for the law. Tarr authored the bill over the past several weeks. A key component of the bill is the requirement that the Public Employee Retirement Administration Commission (PERAC) appoint a receiver to oversee and direct the operations of the board.

“Today we are taking a critical step toward restoring the integrity and stability of a retirement system which needs reform. Thousands of public employees are depending on it for their future; they and the taxpayers who are contributing to its operations deserve the transparency and accountability that it has been lacking,” said Tarr.

Under the dictates of the bipartisan and bicameral bill, the appointed receiver would be charged with restoring sound and prudent management to the ERRB, and would have the authority:

1. To exercise any function or power of the board or its employees.
2. To appoint or remove any employee of the board.
3. To remove for cause any member of the board with 30 days’ notice. The dismissed board member can appeal the receiver’s decision to PERAC. Any seat vacated in this manner will be filled by election.
4. To subpoena from the board or system any documents relevant to the receiver’s administration of the system.
5. To promulgate rules and regulations for the board.
6. To alter or rescind any decision by the board or its employees within 14 days.
7. To oversee and discharge all other duties of the board, with the authority to delegate any of these powers and duties as the receiver sees fit.

When the receiver leaves the position, all board seats will be vacated and new elections will be held. Current board members, as well as members removed by the receiver, will be allowed to be candidates in the following elections, but the receiver will not be eligible for the board.

Senator McGee said, “For a number of years the Northeast Legislative Caucus has worked together to serve the interests of Essex county, and all of Northeastern Massachusetts. With this legislation we continue that tradition. This bill clearly addresses the serious issues raised regarding the administration of the Essex County Regional Retirement Board. When this legislation moves forward we will have fundamentally changed how this board operates, and how oversight of the board is conducted.”

Additional reform components of the bill include provisions to:

“It is our hope that by allowing PERAC to appoint a receiver to administer and direct the Essex Regional Retirement Board, that proper sensible management will be re-established,” said Representative Fennell.

The reform bill reflects the collective input of caucus members, who developed consensus around the pressing need for reform over the past several weeks. The legislators were assisted in the process by municipal officials from throughout the region.

The bill, which contains an emergency preamble allowing it to take effect immediately upon its passage, was filed with the clerk of the Senate today at 5:00pm.