Today I was honored to welcome former State Senate Minority Leader David Locke to the informal session of the Senate. David, who served in the Senate from 1969 to 1993, came to the State House as our guest to graciously participate in an oral history of the Senate project, I am leading in partnership with Senate President Stan Rosenberg. Former presidents William Bulger, Thomas Birmingham, Robert Travaglini and Therese Murray and former Senate minority leaders Brian Lees and Richard Tisei have also agreed to participate in the oral history of the Senate project. 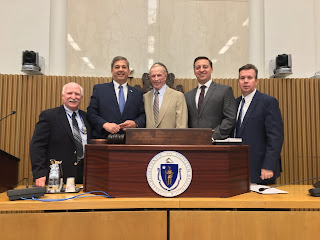