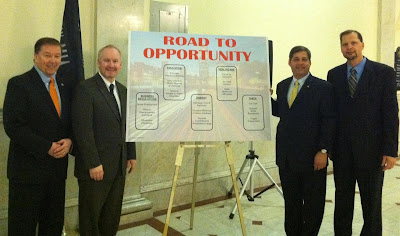 An editorial in today's Boston Globe highlights the GOP Jobs Package that was unveiled by the House and Senate Republican Caucuses last month. The editorial calls the jobs package - which focuses on five critical areas of importance to employers, including business regulations, education, energy, healthcare, and taxes –"a solid effort, featuring a number of ideas that merit serious consideration."

The editorial is reproduced below in its entirety.

"Until the last election, the Massachusetts Republican Party’s legislative ranks had been in decline for almost two decades. Too often, Republican lawmake*rs leaned into irrelevance by failing to push an eye-catching agenda or to act as attention-generating opponents to Beacon Hill’s prevailing Democrats. The party was flat, a collection of odd pieces with no coherence.

But that may be changing. Since the 2010 election, Republicans have more than doubled their House numbers, which now stand at 33. Emboldened by that gain, GOP legislators are determined to play a more important role. Republican representatives and senators recently unveiled a broad legislative agenda focused on making Massachusetts a less costly and cumbersome place to do business.

Reasonable people will disagree about various aspects of the GOP agenda, but in general, their package is a solid effort, featuring a number of ideas that merit serious consideration.

They propose, for example, bringing the state’s generous unemployment insurance program into line with those of most other states. Although business people have long maintained that the high cost of the Massachusetts program inhibits job creation, Democrats have been wary about tackling the issue because of union resistance. Republicans would also overhaul the unemployment insurance rate structure to reward companies whose employees seldom use the system, while raising costs for firms whose workers resort more frequently to unemployment benefits.

When it comes to education, Republicans propose allowing relevant military training, education, or experience to apply toward state college degrees, as well as licenses and certifications granted by the state, to get qualified workers into the employment ranks sooner. They also favor “finish-line’’ grants to help financially challenged students complete the final year of a degree program.

They call for job-creation tax credits that would phase out over about a decade; for state-tax-free savings accounts to help first-time home buyers save up to $4,000 toward that purchase; and for offering firms that register five or more commercial vehicles in Massachusetts a 10 percent break on registration fees.

The GOP effort would be strengthened by reliable price tags for their various initiatives, something Republicans say they plan to develop. Those should include not simply the cost in new state spending but, where relevant, in lost tax revenue, since the package includes a number of tax cuts or credits.

When fully fleshed out and filed as legislation, the GOP proposals should receive a respectful hearing from the majority Democrats. Interesting ideas, after all, aren’t the province of a single party. Massachusetts can only benefit from a broader, more robust public-policy debate on Beacon Hill."