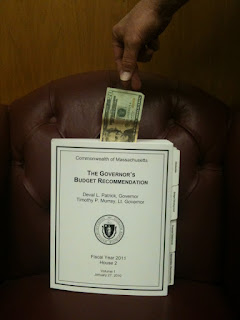 A preliminary review by my office of Governor Patrick’s proposed budget for the next fiscal year, H.2, indicates he is resorting once again to increased taxes and fees to address the state’s fiscal challenges. We have compiled a new “top ten” list, which you can read by clicking on “Read more” below. You can hear my discussion of this list with WTKK talk show host Michele McPhee by clicking here.