I directed my office today to distribute this press release outlining my bill in support of Ukraine.

Boston- In response to Russia's invasion of Ukraine, Senate Minority Leader Bruce Tarr (R-Gloucester), members of the Republican Caucus, and other lawmakers have introduced a bill with bipartisan support that mandates divestment from all Russian investments from public pension funds managed by the state and cuts off access to cash and securities controlled by the Russian Federation or by companies headquartered in Russia within banks subject to oversight by the Commonwealth. In addition, the bill SD 3025, “An Act to Combat Unjust Acts of War by Russia”, authorizes the Governor to end state contracts that would benefit the Russian government or Russian companies.

“Russia’s unprovoked and unjustified attacks have brought nations together and Massachusetts should vigorously pursue options to stand shoulder-to-shoulder with the global coalition supporting Ukraine, defending democracy, and bringing an end to Putin’s ability to cause fear, death, and destruction,” said Senator Tarr. “The people of Massachusetts deserve a way to show support for Ukraine’s fight for freedom. This bill sends a clear signal that we will do our part for democracy in the world.”

The legislation provides State Treasurer Deborah Goldberg with the statutory authority that she says is necessary for the state’s public employee retirement funds to sever financial ties with Russia. The Pension Reserves Investment Management (PRIM) manages a portfolio of investments worth $86.9 billion in assets last year.

“Russia’s aggressive and unwarranted military action against the citizens of Ukraine has drawn international condemnation, and cannot go unchallenged,” said House Minority Leader Bradley H. Jones, Jr. (R-North Reading). “By removing all Russian investments from our state pension fund and taking additional steps to ensure that Russia cannot benefit from state contracts or gain access to banking assets in Massachusetts, this bill sends a clear message that the Commonwealth stands in solidarity with the Ukrainian people and their fight to remain part of a free and sovereign nation.”

Treasurer Deborah Goldberg told a group of 58 lawmakers who requested her action that absent a change in law her ability to act is limited “I do not have the legal authority to act unilaterally to divest PRIT Fund holdings. Divestment requires an act of the Legislature,” she wrote in a letter to lawmakers in response to a request originated by House Minority Leader Brad Jones. “Massachusetts must do our part to stand against the tyranny of Russia and inflict financial consequences for their invasion of Ukraine. I’m sponsoring this legislation to achieve this result, and by doing so, standing in solidarity with the Ukrainian people to ensure that freedom prevails.” said Senator Ryan Fattman (R-Sutton.

“Our Commonwealth should use the tools at our disposal to take action and show the Ukrainian people that we stand with them,” said State Senator Patrick O’Connor (R-Weymouth). “My expectation is that we set the example and more states will join us in this effort to show Russia that senseless acts will not go unpunished.”

Senator Walter F. Timilty, a cosponsor of the bill has also filed legislation to cut off pension investments. "We look forward to a swift public hearing on my bill, SD 3013, and others like it, and will solicit information from the PRIM board on the extent of Commonwealth's current holdings in companies conducting business operations in Russia. In addition to identifying our current investments, and calling for immediate divestment, I believe it is crucial that we send a message to the global community that this Commonwealth stands against Russia's actions in the Ukraine. We have the opportunity in Massachusetts to lead and to codify in statute, that our investments, will be consistent with our values," said Senator Timilty (D-Milton).

Major components of the bill include those which:

The Governor, Secretary of State and the Division of Banks, in addition to the Treasurer, would be authorized to take action to cut off cash and securities owned or controlled by Russian assets under the bill. Legislative sponsors of the new bill urge swift action to help bring an end to the international crisis. 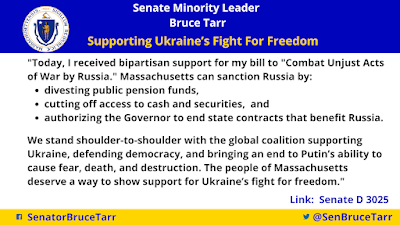