The Purple Heart is the U.S. military combat decoration awarded to those wounded or killed during service and it was first created in 1782 by General George Washington. Purple Heart recipients joined Town of Newbury, MA officials for this important ceremony. At the Newbury Elementary School ceremony, I presented official citations from the State Senate in recognition of the designation.

To be designated as a Purple Heart community the #Newbury Selectboard delivered an official proclamation to the local chapter of the Military Order of the Purple Heart, USA. The organization was chartered by Congress and serves to foster an environment of goodwill among combat wounded veterans, promote patriotism, support needed legislative initiatives, and provide service to all veterans and their families.

Newbury is now the newest community to be called a "Purple Heart Town" and this is a testament to the commitment as it honors the nation's oldest military medal and those who were awarded it. 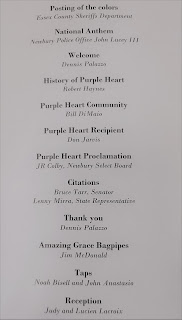 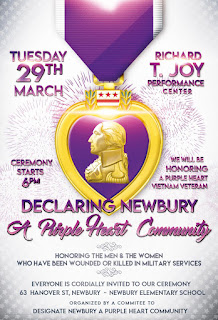 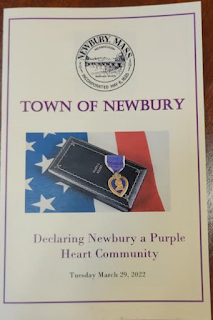