My colleague House Minority Leader Bradley H. Jones, Jr. and I have submitted two letters to House and Senate leadership on March 4. We received the support of a bipartisan group of legislators from both branches, One letter expresses support for House Bill 55, an Unemployment Insurance rate freeze proposal filed by Governor Charlie Baker, while the other calls for the passage of four bills that would create a state tax exemption for PPP loans. The letters were addressed to House Speaker Ronald Mariano, Senate President Karen Spilka, House Ways and Means Chairman Aaron Michlewitz, and Senate Ways and Means Chairman Michael Rodrigues.

Here is a press release that Leader Jones and I distributed today:

House Minority Leader Bradley H. Jones, Jr. and Senate Minority Leader Bruce Tarr are leading efforts to call on House and Senate leadership to act quickly to pass legislation that will assist the state’s employers who are continuing to struggle financially during the ongoing global pandemic.

Several dozen legislators are urging the adoption of an Unemployment Insurance rate freeze, along with a change in the state’s tax laws to protect businesses from being taxed for loans they secured through the Paycheck Protection Program (PPP).

Initiated by House Minority Leader Bradley H. Jones, Jr. and Senate Minority Leader Bruce Tarr, two letters were submitted to House and Senate leadership on March 4 and signed by a bipartisan group of legislators from both branches, One letter expresses support for House Bill 55, an Unemployment Insurance rate freeze proposal filed by Governor Charlie Baker, while the other calls for the passage of four bills that would create a state tax exemption for PPP loans. The letters were addressed to House Speaker Ronald Mariano, Senate President Karen Spilka, House Ways and Means Chairman Aaron Michlewitz, and Senate Ways and Means Chairman Michael Rodrigues.

House Bill 55 would freeze the experience rate for employers at Schedule “E” for calendar years 2021 and 2022. Without legislative action, employers will be facing a significant rate increase that would see their unemployment insurance taxes jump from $539 to $858 per worker this year, with additional incremental increases taking effect in subsequent years.

"Employers across our Commonwealth are struggling for survival against the monumental weight of the challenges presented by the COVID-19 pandemic, and we can't afford to lose the jobs and the vitality they bring to our economy. State government should leave no stone unturned in supporting their recovery and rebuilding," said Senate Minority Leader Bruce Tarr (R- Gloucester). "I am pleased to join with Minority Leader Jones and my House and Senate colleagues because we know vulnerable businesses can't afford large increases in the cost of unemployment insurance or more taxes because they got help from the federal government to keep going through the pandemic. We have two legislative measures we can act on right now to prevent these burdens, and we should do so immediately."

Noting that “Massachusetts has seen a steady drop in unemployment following a long-term period of double-digit unemployment numbers” as more individuals have been able to return to work, legislators warned that “the scheduled experience rate increase of 60% in unemployment taxes, which will take place in just a few weeks, threatens to sabotage this progress,” and would have a “dire financial impact” on employers.

“If enacted, Governor Baker’s bill will provide timely relief for Massachusetts businesses by freezing this scheduled rate increase, while also ensuring the positive solvency of the Unemployment Trust Fund through bonding,” legislators wrote.

Section 1106 of Public Law No. 116-136, the federal Coronavirus Aid, Relief and Economic Security (CARES) Act, provides loan forgiveness to small businesses for certain loans made pursuant to the PPP under the Small Business Act. Under the Act, any amount of canceled debt associated with the PPP loan that would otherwise be includable in the gross income of the borrower under the Internal Revenue Code (IRC) for federal income tax purposes is excluded from gross income.

Members noted that Massachusetts’ corporate tax code conforms with federal tax laws, but that isn’t the case with the state’s personal income tax code. As a result, many independent contractors, restaurants and small businesses will have to collectively pay an estimated $150 million in state taxes on their PPP loans unless the law is changed.

“If business owners had been aware of this tax, they may have budgeted for the cost of state taxes or chosen to forgo receiving a loan,” legislators wrote, adding that business owners have expressed concerns the tax liability “will create further financial hardship for them.”

“Clearly, the intent of the Paycheck Protection Program was for the loans to be forgiven, and taxing them would go against the original intent of the program,” legislators wrote. “We believe that it is crucial to take action prior to March 15th to ensure that these loans are not subject to state taxes, and to provide certainty for small business owners.” 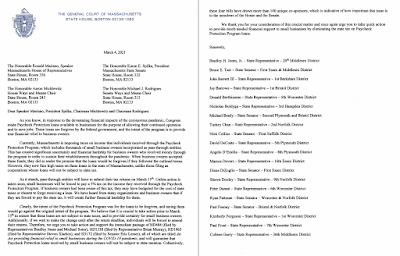 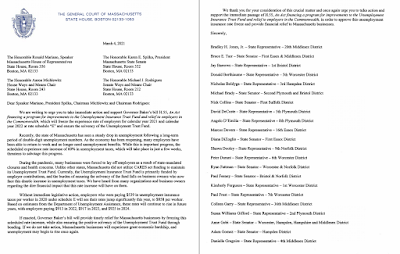