Wilmington’s state Senator, Bruce Tarr, kicked off the changes by securing a $180,000 appropriation with the support of Representative Dave Robertson and Representative Ken Gordon to a recent budget bill to support the station project.

Sustained by legislative efforts, the MBTA has committed to adding a primary source of funds for the project with resources that will result in a new platform, improved access for passengers and those with a disability. In combination, these resources have moved the redesign of the North Wilmington commuter rail station several steps further towards resolving public safety issues with construction potentially beginning as early as this spring.

The original earmarked funds from the legislature can now be repurposed to accomplish additional improvements such as enhanced lighting, paving, and perhaps an overhead canopy.

The lawmakers say the T’s added funds will result in a more cost-efficient path to resolving the issue of the commuter trains blocking the road while discharging passengers. In addition, with project funding secured in the legislative earmarked for design and implementation, additional efforts by the MBTA, and a modified construction and engineering plan, has resulted

Sourcing inspiration from the construction of platforms for the Cape Flyer rail service, North Wilmington’s new platform will consist of recovered bridge segments from the old Central Artery highway in Boston. These concrete sections are cleaned and refurbished and engineered to withstand heavy use. Components will be trucked to Wilmington and assembled to form a platform.

“Working with the T to resolve this issue has been a huge concern of Senator Tarr, Representative Gordon, and myself. With this cooperation with the T, it is my hope that this situation will be fixed with the train removed from blocking the crossing and a new, improved station constructed in a way that saves money and solves our issue,” said Representative Dave Robertson (D- Tewksbury). “It is also my hope that any leftover money we allocated from the state to fix this may be used to improved parking or other elements of the station, making it more attractive to commuters wishing to avoid traffic and improving the service of the T.”

Railings, lighting, and roofing will be installed along with handicapped accessible ramps. Much like other “off-site” prefabricated panels, these recovered platforms save money while meeting all standards of durability and accessibility. Due to the rapid assembly nature, construction timelines are expected to be greatly reduced as well with no sacrifices in build quality.

“I’m glad that together with the MBTA we were able to come up with a solution to this public safety hazard that will increase safety and accessibility for everyone in Wilmington. It has been an honor to work alongside Senator Tarr and Rep. Robertson whose tireless work helped move this project forward,” said Representative Ken Gordon (D- Bedford).

The MBTA's Haverhill line makes multiple daily stops, each taking between 1 and 2 minutes, at the North Wilmington depot. These stops trigger the railway safety gates intended to stop traffic in both directions.

Wilmington’s Police and Fire Department vehicles, and those of other emergency responders, are frequently snared in traffic backups at the station and are impeded in responding to emergencies. 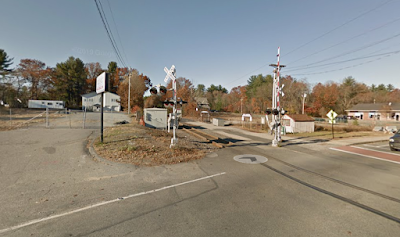