Senate Minority Leader Bruce Tarr (R-Gloucester) successfully championed the legislation which will apply to all documents made or held by the board or any of the public or private entities which receive funds from the MBTA for the payment or administration of employee pensions.

“The value and significance of a fund such as this, with $2.4 billion in liabilities, has a significant impact on the lives of T employees and has major cost implications for the MBTA,” said Senator Tarr.

“Disclosures about the stability of the MBTA pension fund are paramount and deserve to be subject to this records reform law and transparency.” Senate Assistant Majority Leader Mark Montigny (D- New Bedford), a co-sponsor of the amendment said, “Including the MBTA Retirement Board in this records law is arguably one of the most important components of this bill.”

In addition to the inclusion of the MBTA Pension Fund under the public records law, the Senate also adopted other amendments offered by Tarr and members of the Senate Republican Caucus.

Senators also adopted two other Tarr amendments:
• The creation of a fund to provide grants to cities and towns for information technology enhancements to increase public access to records. Funds would be collected from assessed punitive damages.
• The requirement that Statements of Financial Interests, or so-called ethics reports, filed annually by lawmakers to be made available electronically. 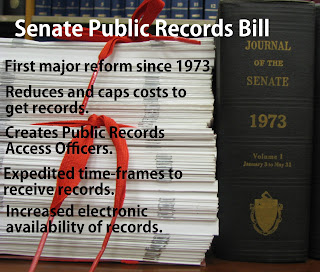