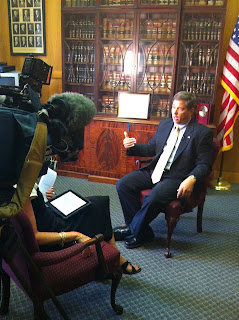 Earlier today I was interview by Channel 5 Reporter Amalia Barreda regarding a letter I sent today with 49 other legislators urging the Department of Corrections to file an appeal to the recent decision by the U.S. District Court in the case of Kosilek v. Spencer. In Tuesday’s decision U.S. District Court Judge Mark Wolf ruled in favor of Michelle Kosilek, a convicted murderer serving a life sentence without parole, mandating the Department of Corrections to provide gender-reassignment surgery to the convicted murderer.

To read the letter that was sent to Commissioner Spencer click here. Please tune in beginning tonight at 5:00PM to see today’s interview.

In addition to Channel 5’s appearance, I will also be discussing the same issue during FOX 25’s nightly news broadcast. To watch tonight’s interview please tune in at approximately 6:15PM.

Also airing throughout the evening on WBZ Radio 1030AM is a report that I am featured in by Suzanne Sausville regarding the court’s decision.
Posted by Bruce Tarr at 5:11 PM