Today I sent out the following press release:

Boston- Responding to the needs of a Gloucester family who fell victim to a house fire, 6 year old Bailee Militello raised over $1,000 selling lemonade at her stand, and today Senate Minority Leader Bruce Tarr (R-Gloucester) presented a citation honoring her at the State House during an informal Senate session.

Bailee, who was accompanied by her father Jimmy, mother Brieana, and 3 year old brother Jimmy, Jr. to the State House, entered the chamber where Senator Tarr, Representative Ann-Margaret Ferrante (D-Gloucester), members of the legislature and staffers congratulated her for her generosity and hard work during a time when others were in need.

“Coming from a tough childhood of my own, Jimmy and I have worked hard to instill the value of helping others, especially for people in the community, in our children,” said Brieana Militello.

At approximately 2:00pm on Monday, July 9th, a house owned by the Cardone Family located at 2 Ashland Place in Gloucester, MA was destroyed by a 2 alarm fire, which was most likely triggered by an electrical outlet. The Gloucester Fire Department did an exceptional job containing the fire, but unfortunately there was little that could be salvaged.

Known for her caring and compassionate nature, Bailee was drawn to the need to help and during a conversation with her mother Brieana, Bailee came up with the idea of a lemonade stand. In a matter of days Bailee had raised a tremendous amount of money and donations to aid in the Cardone’s recovery efforts.

“What Bailee had done in a matter of short time was nothing but amazing. Her hard work should serve as an example to everyone that regardless of your age or ability, you can make a difference to the lives of others when it matters most,” said Senator Tarr. “It was an honor to have had her and her family at the State House today, and I am certain we have yet to see the last of her kindness.”

During today’s visit to the State House, Bailee was asked if there was going to be a follow up to her generosity and she said, “I am going to help kids in the hospital by giving them coloring books.”

After today’s Senate citation presentation, Bailee thanked everyone who was there for attending the presentation. 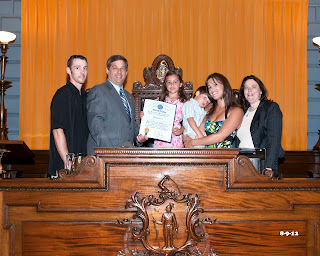