Recently I was honored to present an official Senate Resolution to Erin Pratt of Rockport, MA during a full formal Senate Session. During her regular patrol of Good Harbor Beach in Gloucester, MA as a lifeguard on September 2, 2011, Erin heard cries for help and dove into rip-tide waters to rescue a swimmer in distress. Shortly after her dramatic rescue, she dove back into the dangerous waters to rescue a brother and sister, ages 10 and 12.


Her courageous actions that day prevented the loss of life and avoided a tragedy. After I presented Erin with the Senate Resolution, a resounding round of applause proceeded, with every member of the Senate standing in ovation.


Posted below are two photos that were taken during the formal Senate Session and please click here to watch a video of the March 22nd session to view the resolution presentation to Erin in front of the members of the State Senate. Please click "Read more" to read the Senate Resolution in its entirety. 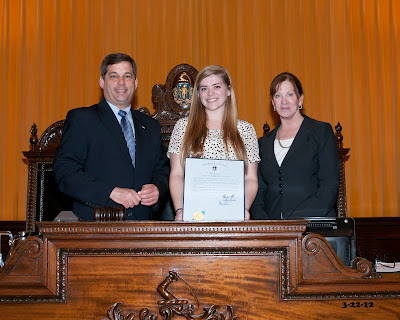 Senator Bruce Tarr stands with Erin Pratt and Senate President Therese Murray at the rostrum in the Senate Chamber. 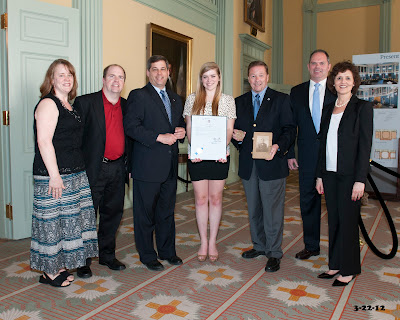 
HONORING ERIN PRATT FOR HER HEROIC ACTIONS AT GOOD HARBOR BEACH ON SEPTEMBER 2, 2011.

WHEREAS, ERIN PRATT FROM THE TOWN OF ROCKPORT SERVED AS A LIFE GUARD FOR BASS ROCKS BEACH CLUB AT GOOD HARBOR BEACH IN THE CITY OF GLOUCESTER ON SEPTEMBER 2, 2011; AND

WHEREAS, ON THAT DAY ERIN, RESPONDING TO CRIES FOR HELP, COURAGEOUSLY DISREGARDED RISK TO HER PERSONAL SAFETY AND DOVE INTO RIP-TIDE WATERS TO RESCUE A WOMAN, RETURNING HER SAFELY TO SHORE; AND

WHEREAS, ERIN RE-ENTERED THE SAME PERILOUS WATERS ONLY MOMENTS LATER TO SUCCESSFULLY RESCUE A BROTHER AND SISTER, AGED TEN AND TWELVE YEARS, BY PLACING ONE OF THEM ON A RESCUE BOARD AND CAUSING THE OTHER TO FIRMLY CLING TO A RESCUE TUBE, TOWING THEM TO SHORE WITH HER STRONG SWIMMING SKILLS; AND

WHEREAS, ERIN HAS BROUGHT GREAT HONOR TO HERSELF, HER FAMILY, HER FRIENDS, THE LIFEGUARD COMMUNITY AND THE ENTIRE COMMONWEALTH; NOW THEREFORE BE IT

RESOLVED, THAT THE MASSACHUSETTS SENATE HONORS ERIN PRATT FOR HER HEROIC ACTIONS TAKEN AS A LIFEGUARD AT GOOD HARBOR BEACH AND EXTENDS TO HER BEST WISHES ON ALL HER FUTURE ENDEAVORS; AND BE IT FURTHER

RESOLVED, THAT A COPY OF THIS RESOLUTION BE TRANSMITTED FORTHWITH BY THE CLERK OF THE SENATE TO ERIN PRATT
Posted by Bruce Tarr at 3:32 PM