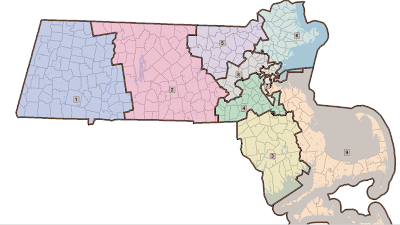 Today the Senate Republicans filed an alternative Congressional redistricting proposal to comply with the state’s need to reduce its number of Congressional seats from 10 to 9 beginning with the 2012 elections.

The plan was filed as an amendment to House Bill 3798, “An Act Establishing Congressional Districts,” which is expected to be debated later this evening during a formal Senate session. Click here to view images of the map and the actual text of the amendment.

• limits the number of municipalities that would be split between two Congressional districts to only five, compared to the Joint Committee on Redistricting’s original plan to split 10 municipalities;

• creates a new Bristol County district that connects communities with common interests into a single district;

• supports a majority-minority district of voting age individuals based in Boston; and

• makes all other districts more compact and/or contiguous.