The tough anti-human trafficking bill signed into law yesterday by Governor Deval Patrick contains a first-in-the-nation provision to penalize those who use the internet to entice minors that I filed with my Senate Republican colleagues, Senators Robert Hedlund (R-Weymouth), Michael Knapik (R-Westfield) and Richard Ross (R-Wrentham). Created through the amendment the new crime of the “electronic enticement of a child” addresses those who use the internet and other electronic devices to lure children into prostitution and other types of sexual servitude.

Human trafficking has not only been happening in our state, it has been evolving to take advantage of modern technology. Now we’re taking action to combat those who would enslave others for profit, and the creation of this specific crime will strike directly at perpetrators who use electronic means to snare victims in a tangled web of servitude.

I was one of six legislators who served on the conference committee that authored the final version of the bill. Among its chief provisions are those that include:

Passing this bill into law will move our Commonwealth to the forefront of the fight against the horrors of human trafficking. Now we will have modern and effective tools to confront the people who profit from enslaving others.

I joined with legislative leaders and Governor Patrick yesterday for the signing of the bill, and am thankful to those who played a role in bringing it to fruition. They include Manchester resident Christina Bain, Director of the Program on Human Trafficking and Modern Slavery at the Carr Center for Human Rights Policy at the Harvard Kennedy School in Cambridge, Senator Mark Montigny (D-New Bedford), Senate President Therese Murray (D-Plymouth), Attorney General Martha Coakley, and Karen McLaughlin, Director of the Massachusetts Human Trafficking Task Force. 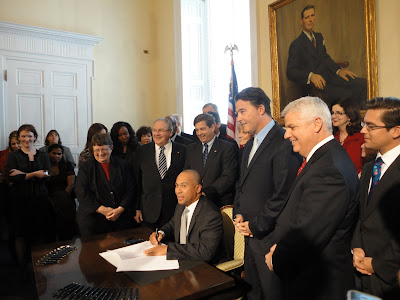 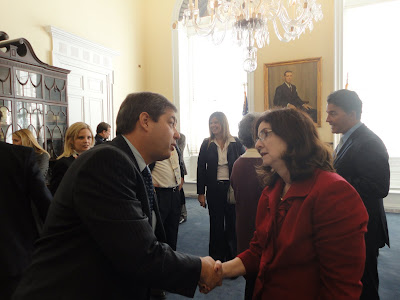