Cold temperatures and snow flurries haven’t stopped progress on the A. Piatt Andrew Bridge in Gloucester and the Bates Bridge over the Merrimack River between Groveland and Haverhill. The most recent progress reports from MassDOT, together with illustrative photos, are posted below.

Description The work involves the removal and replacement of the wearing surface of the bridge deck along with rehabilitation of the superstructure and portions of the substructure on Bridge No. G-05-017 carrying Route 128 over the Annisquam River in Gloucester. The project will also include replacement of the sidewalks along with significant structural repairs and painting portions of the superstructure. A new wearing surface will be placed on the bridge along with a new median barrier. The existing bridge railing will be refurbished and a suicide deterrent safety screen will be erected along the sidewalk. SPS New England, Inc. is completing the work.

Current Project Status – All travel lanes are open to traffic, with the exception of temporary lane closures during non peak hours on weekdays to facilitate ongoing work below the bridge deck. Replacement of structural steel items is ongoing at the arch level in the main span. The contractor has completed paving the east and west approaches.

The painting operations remain suspended and will resume once a new subcontractor is in place. The general contractor is cleaning sand blasting dust and grit from the work areas with a vacuum truck and repairing the containment tarps in anticipation of the resumption of painting in the near future.

Note: Additional project information and history can be found by visiting MassDOT’s website at: http://www.massdot.state.ma.us and clicking on the Projects tab, then selecting “Current Road and Bridge Projects” and after entering the City of Gloucester, select Project No. 604797. 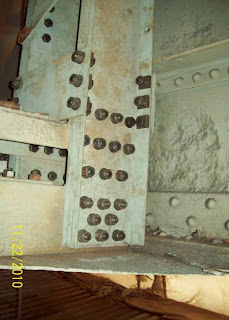 Installation of new end panel member at a lower level truss on the north end of the structure. 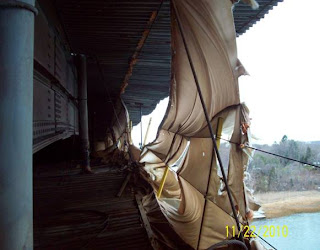 Existing conditions of containment tarps. The contractor is replacing the tarps as the work deck is cleared of blasting grit.

Description The project consists of the replacement of the existing Bates Bridge carrying Routes 97/113 over the Merrimack River with a new bridge located approximately 60 feet downstream. The existing bridge will remain in service during construction. The proposed bridge will have a movable span similar to the existing bridge. In addition to the 775 feet long bridge, the project includes reconstruction of the approach roadways in Haverhill and Groveland and traffic signal and geometric improvements at the intersection of Groveland Street with Lincoln Avenue in Haverhill and at the intersection of Groveland Street with Main Street near Elm Park in Groveland. Cianbro Corporation from Pittsfield, ME is constructing the project.

The primary elements of the bridge work include the construction of a new movable span bridge which includes the installation of drilled shaft foundations, reinforced concrete piers, a structural steel superstructure, a concrete filled grid deck, a moveable bascule lift section, concrete abutments on pile foundations and retaining walls. Temporary cofferdams will be used during the construction of the work, which will include removal of the existing bridge.

Current Project Status – The contractor removed National Grid’s abandoned submarine cable which ran parallel on the downstream side of the existing bridge. Two working barges have been assembled and moved into place for heavy construction activities. Working from these barges, crews have begun installing the cofferdams for piers 3 and 4. The contractor has also installed the cofferdam for construction of the north abutment on the Haverhill side of the river. The majority of the overhead and underground utility relocations on the Haverhill side have been completed along Groveland Street, Old Ferry Road and Orchard Avenue. Overhead and underground utility relocation work continues on the Groveland side along Main Street.

Note: Additional project information and history can be found by visiting MassDOT’s website at: http://www.massdot.state.ma.us and clicking on the Projects tab, then selecting “Current Road and Bridge Projects” and after entering the Town of Groveland or the City of Gloucester, select Project No. 600988. 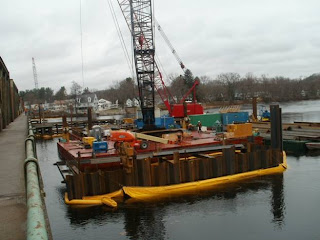 Working barge installing steel sheeting to create a cofferdam for construction of one of the new bridge piers. 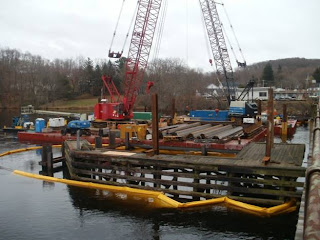 Working barges and cranes being used to support cofferdam construction for the new bridge piers.