Tonight, I released the following statement with Representative David Robertson, and Representative Kenneth Gordon regarding the MBTA fatal accident In Wilmington after the MBTA issued a press release detailing their steps to make certain safety improvements.

Boston- Senate Minority Leader Bruce Tarr (R-Gloucester), Representative David Robertson (D- Tewksbury), and Representative Kenneth Gordon (D - Bedford) released the following statement regarding the MBTA’s press release outlining measures to prevent railway/roadway signal crossing accidents following the fatal accident that occurred at the North Wilmington MBTA Commuter Rail grade crossing with Route 62 on January 21, 2022:
"In the immediate aftermath of the tragic accident in January we pledged to assist Wilmington town officials and the MBTA in any efforts to fully understand the failings that resulted in the loss of life of Wilmington resident Roberta Sausville Devine. In addition, we called upon the MBTA and Keolis Commuter Services to act expeditiously and take necessary measures to ensure the safety of all following investigations. These failures must not be repeated.
Tonight, the MBTA has responded publicly by outlining the several steps that have been undertaken. In the wake of the tragic loss of life that occurred, we welcome the implementation of these important steps to prevent any similar accidents from occurring in the future. Our efforts to support public safety and the proper functioning of commuter rail operations will continue and we encourage the MBTA and Keolis to continue to explore and act on every possible avenue to make the system more immune to human error. We intend to continue that discussion with transit leaders and town officials. We need to do everything in our power to prevent such a tragedy from occurring again"
MBTA & Keolis Take Steps to Further Enhance Safety at Wilmington Railroad Crossing
WILMINGTON – Demonstrating its strong commitment to public safety, the MBTA and its Commuter Rail operator Keolis will exceed standard operating procedures and take additional steps to enhance the protocols for testing the train crossing's protection system on Middlesex Avenue in Wilmington. With multiple tests confirming that all elements of the crossing's infrastructure have continued to perform as designed, the MBTA and Keolis are focused on the human element of federally mandated railroad crossing testing. “I’d like to assure the community that the protection system at the Middlesex Avenue railroad crossing is safe and fully operational,” said MBTA General Manager Steve Poftak. “On top of our regular maintenance, inspection, and testing procedures, additional rules and instructions for Commuter Rail personnel have been introduced to provide another layer of safety-related enhancements.”
“Safety for our people, our passengers and the communities that depend on commuter rail service is our first priority at Keolis,” said Abdellah Chajai, Keolis Boston CEO and General Manager. “We will continue to work with the MBTA and our crews to ensure safe operations at this location and across the network.” First and foremost, Keolis has already retrained all of its signal maintainers on the procedures that must be followed before, during, and after the process of performing regular testing of the railroad crossing's protection system.
In addition, the MBTA and Keolis have initiated the following measures:
• After the testing is completed, the Commuter Rail dispatchers must request, and receive, affirmation from the signal maintainer that the protection system is enabled.
• Following the step mentioned previously, the signal maintainer must remain on-site until the next train passes to ensure the crossing’s protection system is fully operational and, if necessary, be prepared to manually control the protection system if the system does not perform as expected.
• New signage will be installed on the inside of each signal bungalow door to serve as a visual reminder to Keolis personnel to ensure that the crossing equipment has been fully and properly returned to service. 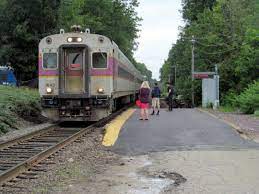