The State Senate today passed legislation that will help protect residents from Eastern Equine Encephalitis (EEE), a mosquito-borne arbovirus that is rare but can be fatal. The legislation comes as the state prepares for what is expected to be another active season for mosquitos across the state.

“With the mosquito season already underway, we must act quickly to protect our residents from the potentially deadly effects of EEE,” stated Senate President Karen E. Spilka (D-Ashland). “This bill will establish a comprehensive and coordinated approach to tackling EEE that will reach all corners of the Commonwealth.”

Last year, Massachusetts saw a resurgence of EEE, with more than two hundred communities designated as moderate to critical risk by the Department of Public Health (DPH). The virus is spread through the bite of an infected mosquito and can impact humans of any age as well as animals. Massachusetts typically experiences outbreaks every 10-20 years, and the outbreak can last for two to three years. In September 2019, the DPH confirmed three deaths due to EEE.

“To better prepare for serious public health risks like EEE, it is important our Commonwealth takes steps to mitigate the risks and protect the well-being of our communities from the threat of mosquito-borne illnesses,” said Senator Michael J. Rodrigues (D – Westport), Chair of the Senate Committee on Ways and Means.

"We all saw what happened last year with the rapid expansion of Eastern Equine Encephalitis, and the consequences of it. That is why this bill strikes a careful balance between the state government's responsibility to respond to an emergent public health situation while properly protecting the environment, including a recognition of the plight of pollinators, as well as the interests of property owners and municipalities so that the spraying is correctly tailored to the threat," said Senate Minority Leader Bruce Tarr (R -Gloucester).

The bill authorizes the State Reclamation and Mosquito Control Board (SRMCB) to take actions to reduce the mosquito population if the Department of Public Health determines there may be an elevated risk of EEE.

These actions include public education, surveillance of the mosquito population, elimination of standing water and application of larvicides that safely prevent mosquitoes from becoming adults. The SRMCB would also be authorized to conduct aerial pesticide spraying, subject to notifying the public and putting in place procedural safeguards.. Certain landowners, such as owners of organic farms, may apply to opt-out of spraying, and a municipality may opt-out of spraying if the Executive Office of Energy and Environmental Affairs approves an alternative mosquito management plan provided by the municipality. The bill also creates a Mosquito Control for the 21st Century Task Force to recommend reforms to modernize and improve the state’s mosquito control system.

The bill now moves to the Massachusetts House of Representatives. 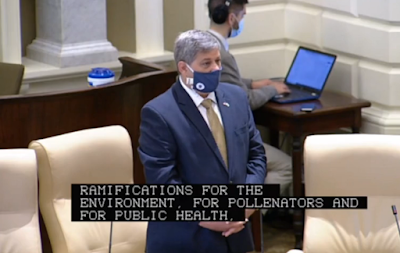