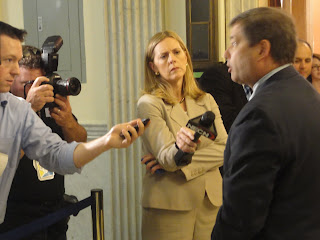 Today’s conviction of former Speaker DiMasi reflects the consequences of an abuse of political power for personal gain. Yet in our Commonwealth, no one is above the law, and the criminal justice system has made that clear in this case.

Abuses such as those in the DiMasi case demand transparency and accountability, and the Senate Republican Caucus will continue to seek every opportunity for further reforms in that regard. Criminal actions such as these should never take place on Beacon Hill.

Some of the reforms offered by the Senate Republican Caucus this session include:

• a proposal requiring the Secretary of Administration & Finance and the Governor to file a zero-based budget every four years, beginning in Fiscal Year 2017, to more effectively allocate limited state resources and allow the Legislature to focus on real spending priorities;

• a proposal directing Governor Patrick and his successors to prepare a biennial plan for maximizing personnel efficiencies and controlling personnel costs;

• a crackdown on the use of so-called “gag orders” and confidentiality agreements when a public employee leaves state service or settles a legal dispute with a state agency so the public is aware of the amount of taxpayer dollars included in a severance package or legal settlement;

• a requirement that any state agency that spends $100,000 or more on consultants must file an annual report with the Legislature detailing the reasons necessitating the use of these consultants; and

• a requirement that more information be posted on the Legislature’s website and made accessible to the public, including information on all state expenditures of $25,000 or more, as well as information on the state’s borrowing and debt, which is the highest in the nation per capita.

Earlier today I had the opportunity to speak with several members of the media including NECN’s Alison King and Channel 7’s Linda Ergas. Please tune in to tonight’s news broadcasts to see my more of my thoughts on the matter.